Residents and councillors have fiercely opposed the cut, but TfL has confirmed it will go ahead with the axe in June 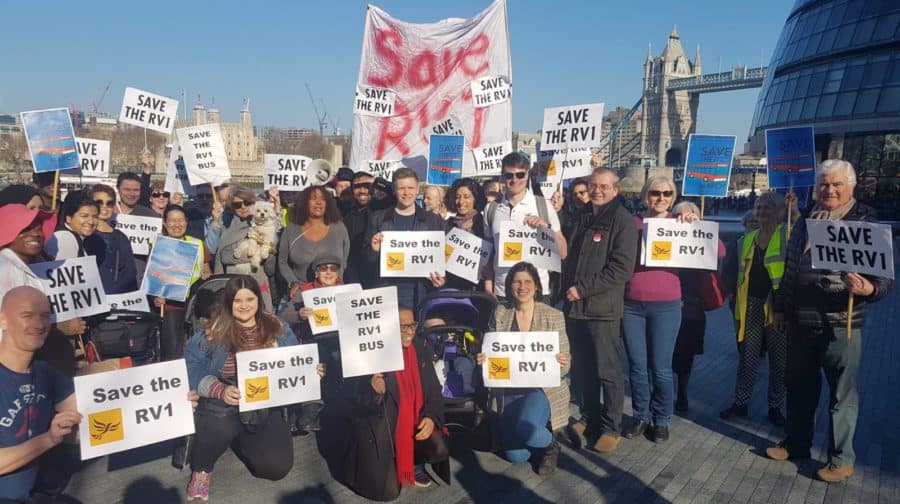 TfL has today confirmed that it will withdraw the RV1 bus service on June 15 despite fierce local opposition to the axe.

The transport carried out a consultation last year about cutting the route as part of its proposals to change 34 of central London’s bus services.

Councillors across the Southwark political divide and residents’ groups opposed the cut – but TfL confirmed it will go ahead with the plan.

In a consultation comments published today, it was revealed that 1, 402 people expressed concerns about access to London Bridge and Blackfriars in the bus shake-up, with the withdrawal of the RV1 being the most common concern.

TfL has insisted scrapping the zero-emissions route, which serves areas of Waterloo, South Bank and Tower Bridge, was necessary as usage had reportedly fallen.

“The total cost of operating the RV1 is about £3.3 million per year,” said the agency in its review of the route, which connects some of the borough’s tourist hotspots such as the South Bank, Globe and Borough Market.

The move has been slammed by ward councillors whose constituencies are served by the route.

Liberal Democrat Cllr Victor Chamberlain, of Borough and Bankside ward, said he was “bitterly disappointed” by the Mayor’s diflucan fluconazole.

“The RV1 is a vital local service which thousands of local people rely upon,” he said.

“The Mayor has shamefully turned his back on them.

“It makes no sense to cut one of the few zero-emission buses in London which serves an area with some of the worst air pollution in the capital.”

The route serves tourist attractions so was “ripe for promotion” he said, adding that the community would fight the cut. Cllr Richard Livingstone, who holds the transport brief at Southwark Council, also criticised the “short-sighted” bus cuts, saying they would hit the most vulnerable residents in the borough hardest.

He also pointed out that several of the services affected by the Mayor’s plans have seen growing passenger numbers.

“We are hugely disappointed by this announcement and would like to understand why TfL has gone ahead with cutting back popular services with growing passenger numbers, such as the 40, 53, 171 and RV1,” he said.

“We simply want a service that ensures that everybody in Southwark can access efficient, affordable, reliable and safe bus services, now and into the future, these plans fall short of this.”

One commuter said in response to the news on social media: “Disappointed to discover that TfL is getting rid of the RV1 bus route which runs from Aldwych to Tower passing the London Eye and going across Tower Bridge.

“It’s the best tourist route bus but useful for commuters and a pleasant journey weaving around London. A shame.”

Thirty-four routes are affected by the changes, with some being withdrawn, others re-routed, and some extended.

Love the RV1. They could just have cut off the London Eye section from the route to make it more useful for commuters.