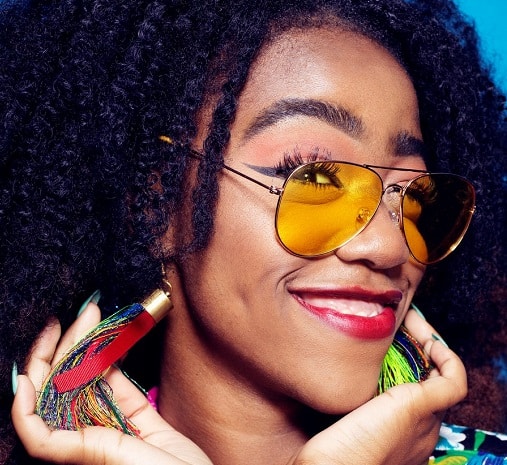 A blogger from Peckham is promoting a healthy body image by starting a campaign in praise of ‘saggy’ breasts.

Chidera Eggerue’s #SaggyBoobsMatter movement sees the blogger and MOBO awards presenter share self-portraits on Instagram, often without wearing a bra under her clothes, to highlight that boobs come in all shapes and sizes.

The 23-year-old says: “I started the #SaggyBoobsMatter movement because women are taught, from the moment of birth, that their value is attached to how likeable they are to men.

“We are taught that we need to be ‘saved’ by men and that only the ‘pretty’ ones end up with the charming prince.

“Sagging of the breasts is normally a feature associated with older women, so any signifier of ageing is instantly met with shame and this is pretty much how we have young women living in bodies they are at war with.

“But through this movement, we can reclaim our bodies by celebrating them without seeking anybody’s permission.

“Celebration begins with self-praise. It doesn’t matter if you do it online or in the mirror or on the bus; what matters is that you are admiring the beautiful existence that you are.

“Your body fights tooth and nail every single day to keep you alive without you even noticing!”

Ms Eggerue has become one of south-east London’s rising stars after being a MOBO award presenter in 2017, and featuring as the only Brit on Buzzfeed’s  ’30 black girls you should follow on Instagram list’.

She says growing up in Peckham has been a big influence on her activism, telling the News: “I’m from Peckham Rye and have lived there my entire life.

“Growing up in Peckham has influenced my identity in a multitude of ways but what always comes to mind when I think about Peckham is the fact that I’m surrounded by so many people who look like me.

“Black people are amazing and it feels awesome to be part of a community filled with people of a similar cultural background to me.

“There are a lot of Nigerian people living in Peckham – in fact, Peckham (before it became gentrified) used to be called ‘Little Lagos’.

“Feeling represented allowed me to feel a lot more comfortable and that comfort allowed my bold voice to grow.

Ms Eggerue has also written her first book, What a Time to Be Alone, due to come out later in the year.

She says: “This book is a collection of poetic Igbo sayings including my own original artwork combined into one volume, along with short essays on everything from bad friends to being loved, making it the perfect handbook for modern life.

She says her mum is a big source of inspiration: “My mother has always taught me that you speak your outcome.

“Watching her live boldly and proudly is what encouraged me to live my life without limits.

“She taught me to never believe anybody is a better person than me, and that anytime I enter a room, I should walk with confidence and speak like I deserve to be heard.

“If I didn’t have my mother in my life, I would most definitely not have the strength of character I have now.

“As much as I don’t like to attach a woman’s strength to her ability to endure pain, my mother is the strongest woman that exists in my life and as a black woman, I feel blessed to have been nurtured by a mother who is so proud of her heritage.”