Four fire engines and a fire rescue unit were called at 7:30am to the scene 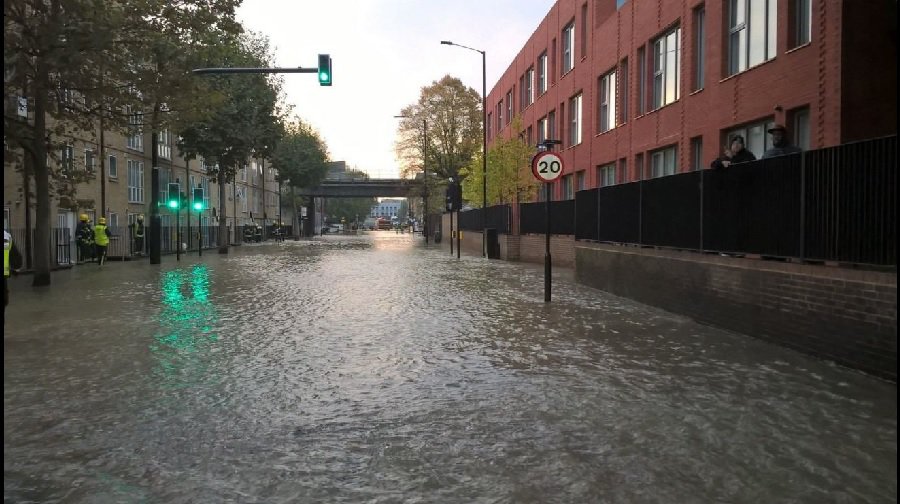 Camberwell New Road could be partially closed for up to a week after a burst water main caused a huge flood to engulf the street, writes Kirsty Purnell.

The closure of the busy main road, the A202 which connects Camberwell to Kennington, is likely to cause major disruption to hundreds of commuters and drivers in the area.

The road was awash with gushing water early on Tuesday morning, with the stream covering pavements and leaking into front gardens.

The London Fire Brigade arrived on the scene shortly after 7.30am and reported that 20 houses had been affected by the flood.

Resident Peter Willis was given sandbags by the fire brigade to prevent the water making inroads into his front garden.

“The road was like a swimming pool,” he said. “My flatmate had to get a piggyback off a fireman to the bus stop because she couldn’t walk to it.”

Thames Water were unable to stop the leak until early afternoon, which left some residents fearing for their homes. “It looks like it’s getting worse,” Tyrone Wynter, who lives close to the burst mains, told the News on Tuesday. “They haven’t tempered the flow. If they don’t stop it then it’s going to end up in my house.”

Peter Willis outside his home in Camberwell New Road

Camberwell councillor Kieron Williams said that Thames Water planned to dig up the road and inspect the pipe on Tuesday night, after which they hoped to confirm the timescale of closure.

They told cllr Williams that there was a chance of the road being 50 per cent closed for up to one week, depending on the extent of the damage to the pipe.

“This is a congested route at the best of times,” said cllr Williams, “So it’s not ideal.”

TfL is managing diversions and traffic signalling in the area during the road closure. It has confirmed that four bus routes have been diverted but stated that there are not significant delays to any of these.

Some residents are concerned about the safety implications caused by the increased congestion on side roads as a result of diversions.

“Today, there was a big diversion with all the buses coming through on the smaller roads like Wyndham Road and Comber Grove,” said local resident Jane Bevis, “There are three schools on this route – Comber Grove Primary, St Joseph’s Infants and Ark All Saints Academy. This is not good.”

Jane, part of a local residents’ group, stated that concern over volume of traffic on the road had recently been voiced at a meeting, even before Tuesday’s disruption.

“Residents are already upset about it,” she said.

Cllr Williams was keen to assure local residents that should the closure be a longer term fixture, he’d be asking Southwark Council and TfL to look carefully at their diversion plans, ensuring that safety is kept at the fore.

Thames Water stated that it would be responsible for cleaning the silt off the road.

This major incident comes after a smaller incident two weeks ago, where there was a leak from a different pipe outside The Bear pub, also on Camberwell New Road.

Despite the inconvenience, many people managed to see the funny side, with people posting humorous pictures and tweets on Twitter.

One which attracted attention was a picture of TFC Supermarket staff using a forklift truck to cross the floods to get to work.

“It was my idea,” said manager Roger Stirbei, “Because we had no way to get into the shop! It was funny.”