Five men have been arrested on suspicion of attempted murder 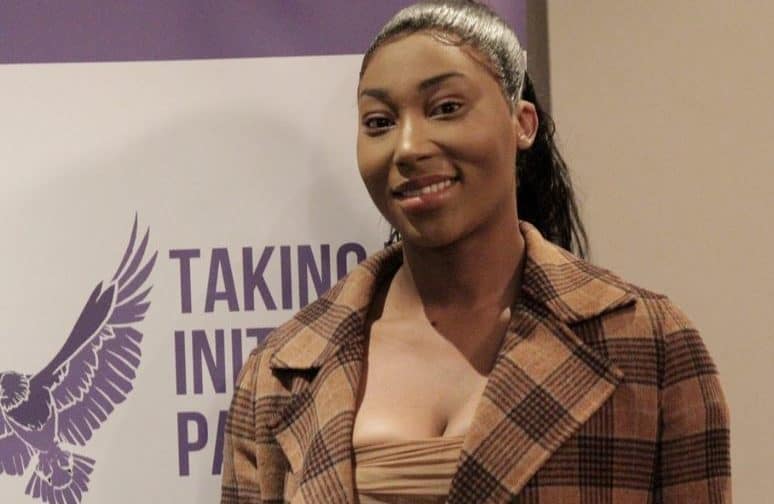 About 100 people gathered this week for a vigil for Sasha Johnson, the young mother and Black Lives Matter activist who is in a critical condition after being shot in the head in Peckham on Sunday.

Sasha, 27, is being treated in King’s College Hospital. Five men were arrested on suspicion of attempted murder on Tuesday. Police say they think her shooting at a house party in the early hours of Sunday was carried out after ‘four men entered the garden and discharged a firearm’.

Friends and family held the vigil at 3pm on Monday in Ruskin Park, just to the south of the hospital. With rain pouring down, a core group of people close to Sasha formed a circle to shelter in the park’s bandstand while others gathered outside.

A friend of Sasha called her “a queen” and urged the crowd to “put a ball of healing around her”. A man played a drum with his hand while others murmured their appreciation for the woman’s words. 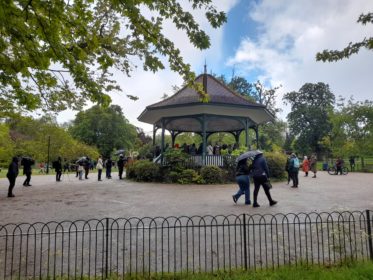 The vigil in Ruskin Park

“Sasha supports the young people in everything she does, she’s a light in the darkness and she continues to shine,” the friend said. “She will continue to create opportunities that will turn into a testimony, no matter what. We come today because this is a response to the work she has done for us.

“The first person to call, if anything happens to our enemy, not us, she will be the one to make sure she is the voice for our community. No one can contest that she has been consistently consistent. Nobody can take that away from her…”

The woman added that nothing will “change the narrative of what [Sasha’s] life is going to be.”

“That’s our sister. That’s my sister. My sister needs you to focus today. Put a ball of healing around her. She just needs to rest. This is just another story, just part of her next chapter. It’s not that deep. Come on, this is Sasha Johnson, are you mad?” 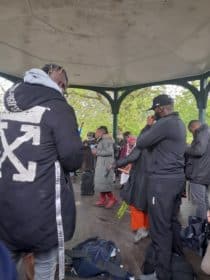 Family and friends at the vigil

Sasha, a mother-of-three, had an operation following the attack on Consort Road, according to the Taking The Initiative Party (TTIP), of which she is a member of the leadership committee. She was also a prominent figure in last summer’s Black Lives Matter marches in London.

Police said they believe she was shot by a group of four young black men, who “entered the garden of the property and discharged a firearm.” The men left the property before the police arrived. Another man sustained a superficial knife wound in the attack.

Five men were arrested on Tuesday for the attempted murder of Sasha after first being detained for violent or drugs-related offences.

The men were aged between 17 and 28. The final suspect, a 25-year-old man was arrested after a police chase in Peckham.

Searches continue at two addresses in Peckham and in relation to the man’s getaway car.

Detective Chief Inspector Richard Leonard from the Met’s Specialist Crime who leads the investigation said: “While the investigation remains in its early stages, these arrests show that progress is being made. However, I would continue to appeal to those who may hold information about the events that led to Sasha receiving her horrific injuries, or about those responsible, to do the right thing and come forward and speak to police.”

Superintendent Kris Wright, from the Central South Command Unit, responsible for policing in Southwark and Lambeth said: “These arrests are the result of instinctive local police work, combined with fast-time intelligence gathering, and shows the effectiveness of the various police teams in the Met working together.

“Local officers, supported by specialist teams, will continue to be in and around the Peckham area in the coming days and I continue to urge anyone with concerns to engage with them.”

Commander Alison Heydari, leading the investigation, added: “I want to take this opportunity to reassure you that we are doing everything possible to identify those responsible and bring them to justice.

“Tackling violent crime on the streets of London is a top priority for the Met, and the people of London have a vital role to play in that.”

TTIP said after the attack that Sasha had received several death threats. But Cdr Heydari said: “We are aware of Sasha’s involvement in the Black Lives Matter movement in the UK and I understand the concern this will cause to some communities – however I wish to stress that at this time there is nothing to suggest Sasha was the victim of a targeted attack.”

TTIP questioned this in a later statement, asking how police could know what had happened when they are not able to speak to Sasha. Founder member Charles Gordon said: “I would like to say that we need to stay cautious and aware – the truth is that we don’t know what has happened here, but we do know that an attack on one is an attack on all.”

Harriet Harman, MP for Camberwell and Peckham, said on Twitter: “Deep sadness and solidarity for Sasha Johnson in King’s College London today. Guns have no place in Peckham. [Met Police] investigation of utmost importance. This horrific crime must not go unpunished.”

Cllr Kieron Williams, leader of Southwark Council, added: “I am shocked and saddened that this has happened in our borough, our thoughts are with Sasha and her family and we wish her a full and speedy recovery. We are assisting the police with their enquiries so that they can establish what happened.”

Anyone with information about the attack should call police on 101 quoting reference CAD1172/23MAY or ring Crimestoppers anonymously on 0800 555 111.