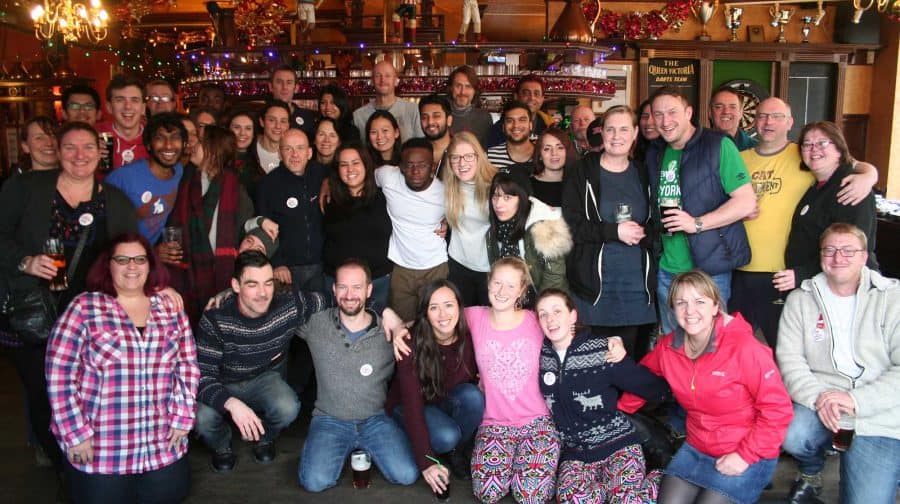 A school in Bermondsey opened its doors to give homeless people a roof over their heads this Christmas for the first time.

Volunteers working their last night shift at the Harris Academy in Southwark Park Road celebrated a job well done in the Queen Victoria on Wednesday morning after they had helped run a crisis centre there over the festive season.

Fiona Flynn, an English teacher from Peckham, has been the head chef on the night shift at the pop up homeless shelter for the last three years and said she would not want to be anywhere else at Christmas.

“Once you get on the night shift you don’t look back. There’s a really great atmosphere in the kitchen and I like feeding people,” she said.

Former banker, James Hayes has been running the night shift at Crisis at Christmas for the last fourteen years and says this first year in Southwark was a success after they gave shelter, food and a listening ear to around 250 newly homeless people a night.

“I’ve met some fantastic people, both guests and volunteers,” said James, who is now the CEO of the Emmaus charity in Lambeth. “Guests are genuinely grateful and appreciative just for having someone to talk to and someone to listen. It’s so humbling how grateful people are.”

Mr Alan Dane, Principal of Harris Academy Bermondsey, said: “With a building in the heart of London, working with Crisis gave us the chance to help them do something amazing for homeless people this Christmas.

“Everyone at the Academy wholeheartedly embraced the opportunity to help Crisis.  Several of our staff came into school to volunteer and our girls worked hard before the holidays to collect thousands of everyday items given by Crisis to the homeless people using their service.”