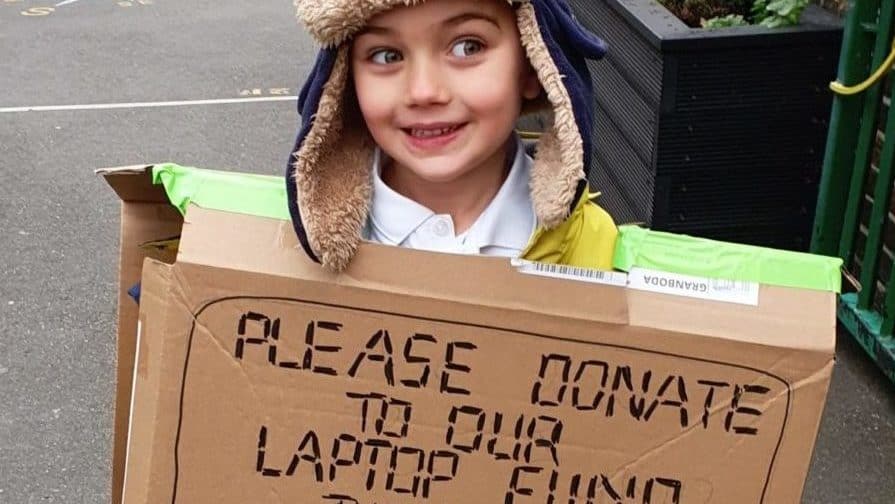 A fundraiser from Goose Green Primary. Many schools have been appealing for support throughout the pandemic.

Schools are desperately trying to help pupils without computers of their own before they are left even further behind, as government-promised laptops fail to materialise.

A parent from Goose Green Primary School has been collecting old and unwanted laptops and converting them into Chromebooks for pupils without the technology they need to work from home.

Many of the pupils at the East Dulwich primary do not have a laptop of their own and are either struggling to keep up from home or having to go into school despite the lockdown.

PTA member Helen Kelsall started the campaign with her husband after finding out in November that only six laptops would be provided by the government for the school’s pupils – and only if more than fifteen tested positive for the virus.

Before the latest lockdown was announced pupils were left struggling if they had to self-isolate at home due to COVID-19 exposure. Now the situation is even more dire, with the school “nowhere near” the number of laptops its pupils need while they remain closed to most pupils until at least February.

As well as converting unwanted laptops, and fully wiping their memory, cash donations are also being used to purchase new equipment via a JustGiving Fundraising page.

Other schools to share call outs for spare laptops include Snowsfield Primary, which has urged anyone who can donate to get in touch, and Peckham’s Hollydale Primary, which tweeted: “Plea to alleviate digital poverty at our school. Lots of our families require laptops or tablets.

“If you work for an organisation or know anyone who has old, working laptops or tablets that could be donated, we’d be beyond grateful.”

The schools who do have provision say they have been able to support students thanks to the generosity of parents.

St Mary Magdalene Primary says 90 per cent of its pupils are now accessing remote, online learning thanks to community donations and support from the charity Business for Schools; which provides recycled electronic equipment.

Bermondsey and Old Southwark MP Neil Coyle described the government scheme as ‘still a mess’ ten months after the first promises were made.

He urged any parents in his constituency who needed help with accessing technology, or anyone with laptops to donate, to contact his office.

Around half of the pledged million laptops have been distributed across the country, with a further 100,000 sent out this week. But teachers say it falls far short of demand, has been painfully slow, and does not address problems with slow internet or the cost of WiFi.

This week it emerged Williamson had even turned down BT’s offer of WiFi vouchers for children from vulnerable families, back in June 2020.

The comments were slammed by the National Association of Headteachers’ general secretary, Paul Whiteman, who said staff only had a 48-hour turnaround to set up remote learning after repeated denials schools would not close.

“Meanwhile pupils up and down the country are still awaiting the internet devices that were promised last summer,” Mr Whiteman said.

“We’re into the ninth month of the pandemic and many schools and pupils are still waiting for their allocation to come through.

“And devices are only being made available for older primary pupils, not those in key stage one at all.

“The government really has really let young people down miserably on this one.”