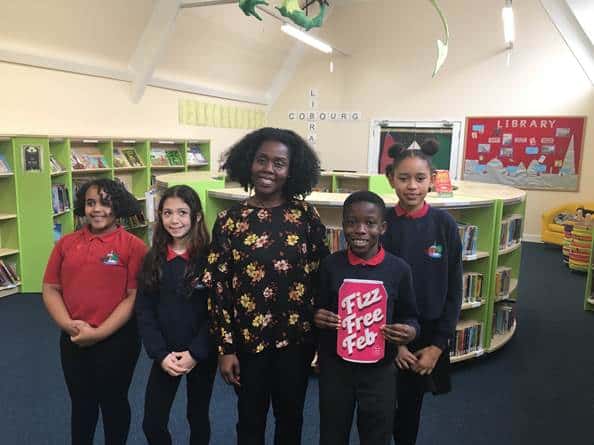 Schools across Southwark are going fizz free throughout February to help turnaround the borough’s reputation as having one of the highest rates of childhood obesity.

The challenge, in its third year, has also been taken up by London Mayor Sadiq Khan and schools across the country and as far afield as New Zealand.

Conceived by Southwark Council, it aims to help raise awareness of the high sugar content in fizzy pop and encourage people to make healthier choices.

Among the schools visited by Southwark Council’s Evelyn Akoto, the cabinet member for public health, is Bermondsey’s Coburg Primary School, where she spoke about hidden sugars and how they affect our health.

“We’re so pleased primary schools around the borough and around the country have taken on the importance of drinking more water,” she said.

“Cola and other drinks can contain up to ten teaspoons of sugar.  The total recommended amount of sugar per day is just six teaspoons.

“Really, the best option is for everyone to be more aware of hidden sugar. In the longer-term, our individual choices support Southwark and other communities in tackling childhood obesity. Everyone should have the best chance to lead a healthier life.”

Last Thursday, Townsend Primary School held a special assembly for pupils to learn more about keeping their teeth healthy and why consuming less sugar will benefit their health.

Others to support the campaign include BBC presenters Sue Atkins and Naomi Kennedy and bloggers like Melanie Purnode and John Adams who are sharing their progress on social media using the hashtags #FizzFreeFebruary and #GoFizzFree.