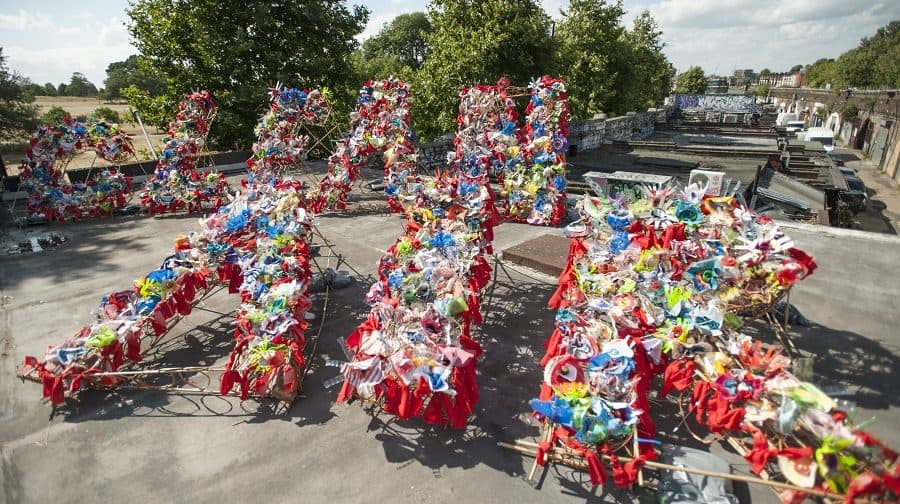 The artwork installed on Olleys roof

A group of artists and activists collaborated with local schools and parents at the Lambeth Country Show to create an art installation demanding that Lambeth Council ‘Clean Our Air’, writes Jessie Kolvin…

Children from four Southwark primary schools worked alongside artist Hannah Littlejones (who conceived of the idea) and Red Line Action, a group of artists and climate activists, to create a sculpture reading ‘Clean Our Air’, made out of willow cane.

People were then invited to decorate the sculpture with flowers made from recycled materials and the finished artwork was carried in procession along the road to Norwood Road restaurant Olley’s Fish Experience.

Installed on the rooftop of Olley’s, the installation will be in full view of those travelling on mainline train routes into London.

In September, the artwork will tour Southwark and Lambeth, being displayed in primary schools.

The project was brainchild of artist Hannah Littlejones, who worked with the schools throughout to realise the idea.

The collaboration was organised by Pia Longman, head teacher of Peter Hills Primary School in Rotherhithe, who hoped to teach children the importance of social responsibility and the possibilities of engaging in creative activism.

Supporting the project was local campaign group Mums for Lungs, fighting for cleaner air in Lambeth and Southwark.

Jemima Hartshorn, the group’s founder, explains that: “Engaging children on the dangers of air pollution is crucial in raising awareness of London’s illegally dirty air.”

Mums for Lungs’ principal aim is for Lambeth to introduce School Streets, a scheme already being implemented by other London boroughs.

School Streets is the temporary closure of roads around schools to vehicles during drop-off and pick-up times. Not only does this reduce pollution, but it encourages children to walk or cycle at least some of the way to school, and increases road safety.

The need for action is particularly great in Lambeth: a freedom of information request made by Mums for Lungs to Lambeth Council provided data showing that concentrations of NO2 around 40 schools in Lambeth are at illegal levels. NO2 is one of the main polluters contributing to the premature deaths of thousands of Londoners every year.

Trials of School Streets in Hackney, Croydon and Camden are returning positive results: councils are citing safer streets with minimal impact on residents and businesses.

Hackney is now rolling out its scheme to a further 12 schools.

A petition for School Streets in Lambeth garnered 435 signatures at the Country Show; the online equivalent currently has 137 signatories. The petition has been delivered to Councillor Claire Holland, cabinet member for environment and clean air.