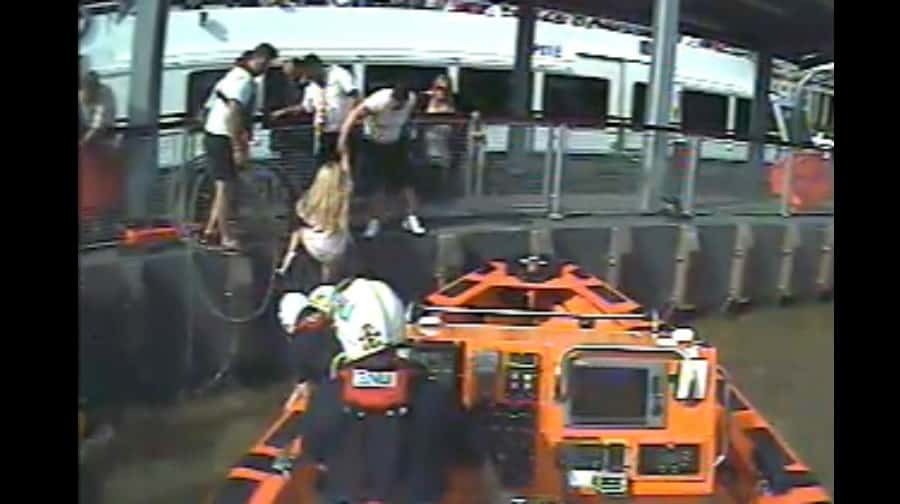 A heroic Scottish tourist has been praised by RNLI lifeboat crew, after she helped save a woman seconds away from drowning in the Thames near Bankside Pier.

The drama unfolded on Monday when London Coastguard called the Tower lifeboat crew after reports a woman was in the river near Shakespeare’s Globe theatre.

The crew rushed to the scene where they found a member of the public gripping the hand of a woman in the water. With the casualty in one hand, she herself was being assisted by an employee of London’s Thames RIB Experience, who had moored up one of their vessels by the pier.

The would-be rescuer, Scottish holidaymaker Natalie Harrison, was keeping the casualty afloat, stopping her from drifting away in the dangerous tidal flow of the Thames.

Steve King, full time lifeboat helmsman at Tower RNLI lifeboat station, said if it were not for her actions, the lady in the river may not have survived, and described what she did as “a risky, but utterly selfless and incredible act of public service”.

Steve said: “As they came into sight we saw this blonde haired figure hanging over the safety barrier and holding onto the woman in the water. I had to squeeze our lifeboat into a very small gap and it was very tricky to manoeuvre our port side near to the pier so that we could get her onboard.

“We got in close and one of the staff from the Thames RIB experience boarded the lifeboat to help us pull the woman from the river. If it wasn’t for Natalie’s heroic efforts she may have already gone under and we might not have been able to save her.”

The woman in the water, estimated to be in her late 20 or early 30s, was conscious and was breathing when she was pulled onto the lifeboat, but was “wet, cold, and distressed”.

Steve added: “Whilst en-route back to our station near Waterloo Bridge we requested an ambulance meet us there. The woman was assessed and, when we arrived, taken into the casualty care room until the London Ambulance Service and Marine Police could look after her.

“As a general rule, the RNLI doesn’t encourage what Natalie did – if people enter the river or sea to try to rescue others they risk getting into difficulty themselves, which exacerbates the rescue situation for emergency services. We normally advise people to raise the alarm and call the Coastguard.

“That said, there’s no denying what she did was utterly selfless, an incredible act of public service. I believe she was on holiday in London and was nearby when she saw the woman in the water, and acted immediately to help. The woman in the river was vulnerable and me and my fellow lifeboat crew members feel Natalie’s brave actions may well have saved that woman’s life.”

The RNLI is currently in the midst of its annual Respect the Water campaign, a safety initiative aimed at reducing the number of accidental drownings around our coastline and in inland waters.