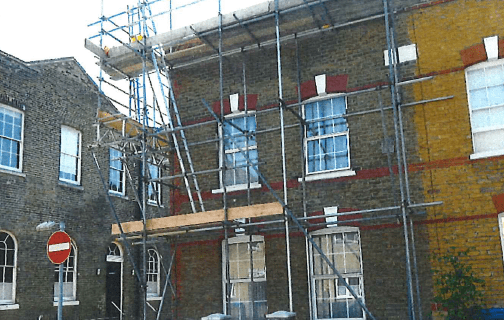 An image of the scaffolding erected on the house

Two money mules, who were used by rogue traders who defrauded a SE1 pensioner of £72,000, escaped jail last week.

The use of these mules is a tactic often adopted by the perpetrators of rogue frauds, to try to evade justice.

And on this occasion, despite the ‘mules’ being convicted, the identify and whereabouts of the actual fraudsters who conned the pensioner out of this vast sum of money remains unknown.

The elderly homeowner, named only as Mr Andreasen, opened his door to untraced rogue traders in 2017, who said that his roof needed cleaning – only then to go on and bit by bit defraud him of the £72,000.

The repair work they conducted turned out to be “shoddy” and “worthless.”

The unknown individuals ordered the victim to transfer money to David Butler, 44, of Douglas Lane, Staines, and Samson Smith, 48, of Weld Close, Staplehurst.

The pair both pleaded guilty to charges of money laundering and were sentenced at Inner London Crown Court last Thursday, June 13. Butler received a jail sentence of 16 months, suspended for two years, with 180 hours of unpaid work.

Smith received a-12 month suspended jail sentence, with 100 hours of unpaid work. Neither has any assets, but £200 costs were awarded against Butler.

The court heard that the money transferred to Butler and Smith was quickly withdrawn in cash; which led to their identification and subsequent money laundering charges being brought.

The arrangement was found to be contrary to the Proceeds of Crime Act 2002, as Butler and Lane ought to have known that the money constituted the proceeds of crime, the court was told.

A report this week suggests that middle-aged people are increasingly being lured into becoming ‘money mules’ and their bank accounts used to launder proceeds of crime.

More than 40,000 cases which ‘bore the hallmarks’ of money mule activity were reported to UK fraud prevention service Cifas last year, up 26 per cent on 2017.

Mr Andreasen’s case and the conviction of the Butler and Smith was highlighted by Southwark Council’s Trading Standards Team as part of the Citizen’s Advice Scams Awareness Week.

It is reported that in April 2017, Mr Adreasen came home to find four men outside his house, one of whom called himself Eddie.

They said they could see debris from his roof gully, and volunteered to clean it up for £20.

Once finished, the men then allegedly told him that essential further work would cost £3,500 and scaffolding an extra £2,000.

Eddie then drove the pensioner to a cashpoint to withdraw £2,000 in cash.

However, Eddie later insisted more scaffolding was needed – costing an extra £15,000 – alongside £25,000 to fund a large workforce to complete the work.

Mr Adreasen was then later persuaded to part with another £30,000.

Putting aside warnings that the roof was unsafe, Mr Andreasen went up to take a look and saw no work had been completed, despite him handing over large sums of money.

He contacted Citizens Advice, and they alerted the council’s Trading Standards team, who carried out an investigation and commissioned an expert report on the roof.

As the works had not been completed and were deemed “worthless” in the report, Mr Andreasen obtained a further quote to complete the works, costing £6,850 in total.

The pensioner said: “I cannot imagine any other public body prepared to work for years to get a result – I think that’s amazing. The police did not seem willing to follow up and the only organisation doggedly doing something about this is Southwark Trading Standards, and that is incredible.

“On a human basis there has been someone there to support me, someone there I could talk to. So it has not just been cold bureaucracy, I’ve felt very supported. I’m enormously grateful for all the hard work they’ve been doing.”

Southwark Council Cabinet member Cllr Victoria Mills added: “This is awful and it is so important that we all work to support and protect vulnerable people and that no-one engages with anyone who comes to their door, offering services.”

Further details can be found on the Citizen’s Advice Bureau’s website here.

Southwark NewsNewsSE1 pensioner ‘scammed out of £72,000’ by rogue roofers