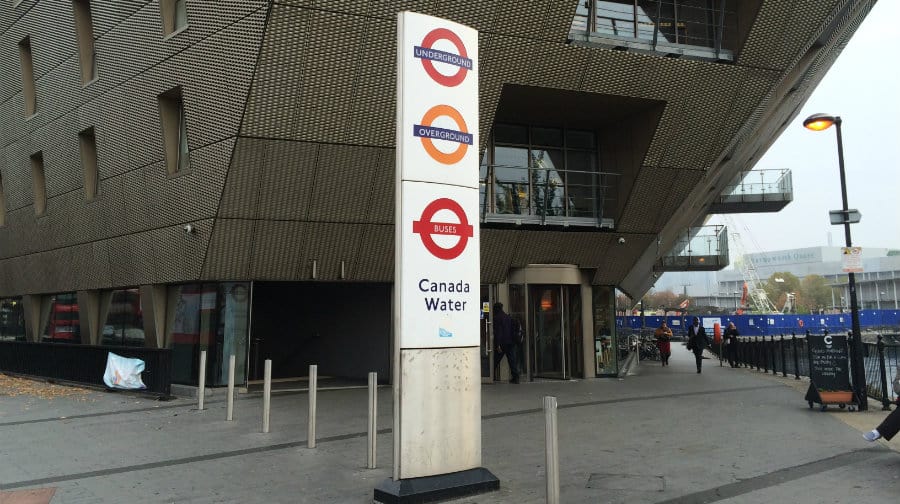 Over £80million of Government cash has been awarded today for transport improvements around Canada Water and Surrey Quays.

The Housing Infrastructure Fund (HIF) bid was submitted to the Government in December last year, to support up to an additional 14,000 homes by 2031.

Among the changes expected from the successful £80.8million bid include a second entrance at Surrey Quays station, a new station at Surrey Canal Road, between Queens Road Peckham and Surrey Quays, and “additional facilities” at Canada Water bus station.

The additional facilities are expected to include a new route to serve the serve the 3,500 home Convoys Wharf mixed-use development in nearby Deptford.

Part of the bid money is also expected to go towards increasing the frequency of trains on the Overground East London Line to twenty an hour.

The funding is given to projects which deliver infrastructure improvements for the supply of new homes, in “areas of greatest housing demand.” Bermondsey and Old Southwark MP, Neil Coyle, told the News: “We have needed investment in transport infrastructure for some time in Rotherhithe. Tubes and buses have been stretched and people have been concerned about new house building without this vital funding.

“I’m glad to have played my role in ensuring crucial new resources help build capacity at Canada Water and Surrey Quays and mean we will also get more genuinely affordable homes locally.

“This is good news for SE16, Southwark and London.”

Other successful Housing Infrastructure Fund announced today include projects in Essex, Enfield and Herfordshire. £600million has been pledged for the five projects in total.

“I want to see more homes built in the places people want to live, so more people realise the dream of homeownership,” said Chancellor Sajid Javid.

“But we need the roads, rail links, and schools to support the families living in those homes, which is why I set up a fund to put in place the infrastructure to unlock new homes in these areas.”

Concerns have previously been raised about overcrowded public transport in the SE16 area.

London Assembly Member, Florence Eshalomi, spoke of her constituents’ concern at Canada Water station overcrowding, which serves both the Jubilee Line and Overground in May.

In response, Mayor Sadiq Khan said: “Canada Water can get very busy, but staff are trained to carefully manage passenger flows at the station to ensure a safe travel environment and minimum inconvenience for customers.”

Separately, a Google Maps analysis of ‘crowdedness’ reports from its users in June revealed the station to be among London’s most congested.

1. This is good news, to start addressing the three big developments and all the “on the side”little ones coming on line as we speak on top of Canada Water, Convoy Wharf and Timber Yard which could amount of 10,000 new properties or perhaps 30,000 new people coming to live in our area and for which Canada Water will be a main access to transport of all types.

2. A second entry is vital and we have been asking for this for ages, as Canada Water is closed because of congestion on a regular basis.

3. The London Overground needs “route fixing” as it is so unreliable with so many hard to explain delays on one of the oldest underground routes in the world. Definitively needs looking in to. Once I tried Canada Water to Claphan and it took much more than an hour!

4. A NEW LINK IS NEEDED: A very good and cheap/ free ferry service is needed across the river from Rotherhithe to Canary Wharf (if the bridge is not coming), perhaps a tunnel would be even better, this would be justified, it would aleviate the Jubilee line if people could cross the river with ease, perhaps they would use their bicycles more often. This needs to be looked in to as this is one of the few innitiatives which would provide a “new link”, such a contribution is vital to lighten the load of the overloaded links already not coping.

In addition to what I just said, while a new entrance to Surrey Quays would be good and welcome, the real new second entrance has to be in Canada Water !! This may aleviate the flow and the need for closing down the station at peak times.

Such a shame the bridge project was scrapped..

Placing a plaster on an open wound. Funny how this has been fast tracked just before next months masterplan goes before planning committee? Politicians are now all coming on board to claim involvement when it was mainly local activists that have been banging on about this for decades.
Lets not forget it was only a couple of months ago that the rotherhithe cycle/ pefestrian brisge to canary wharf was put on the scrap heap. A new entrance to Surrey Docks Station is hardly going to eleviate the introduction of a 70% increase of the rotherhithe & deptford population.