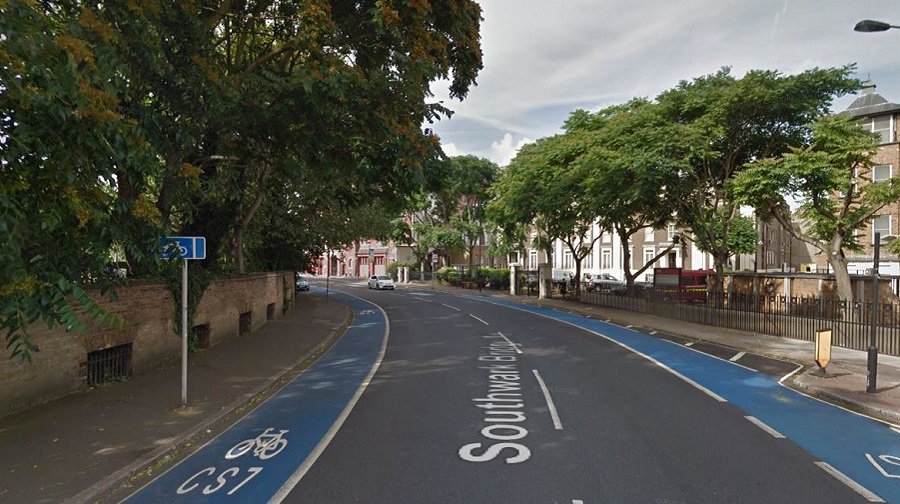 Southwark Bridge Road, which will get a full segregated cycle lane

The council is proposing a number of changes to several of Southwark’s highways in a bid to encourage social distancing and cycling during the pandemic.

In a document published online on Friday, a series of changes are proposed on major roads including Southwark Bridge Road, Rye Lane, Walworth Road and East Street.

Some of the measures have already been announced under programmes such as the ‘Healthy Streets’ initiative.

Among them include creating an ‘experimental’ one-way segregated cycle lane along Southwark Bridge Road, with some form of segregation expected to be made permanent in the future.

East Street would see “permeable closures” at the junctions of Blackwood Street and Walworth Place, while a number of contraflow lanes could be installed in the one-way roads surrounding Peckham Rye station.

In the south of the borough, cars may be banned on Carlton Avenue between Dulwich Village and Court Lane.

“The government will begin to ease restrictions, and in doing so, the council should seek to maintain as many of the benefits as possible, whilst helping the borough to recover,” states the report.

“Put simply driving and associated air pollution have been considerably reduced but may return to higher levels than before the lockdown as people are concerned about using public transport.

“Therefore, there is an urgent need to maintain lower levels of driving and to quickly improve walking and cycling.”

It adds that as more shops begin to open – with most non-essential shops reopening from June 15 – space on pavements will become more crowded for pedestrians, meaning interventions are needed.

The proposals are being circulated to ward councillors for each of the areas affected, to allow for comment on £318,000 worth of proposals.

To find a full list of the measures and what they would entail, you can find the council’s report here.

A decision on the measures has to be made by June 15.