The robot was spotted in Willow Walk, Bermondsey, by passers-by 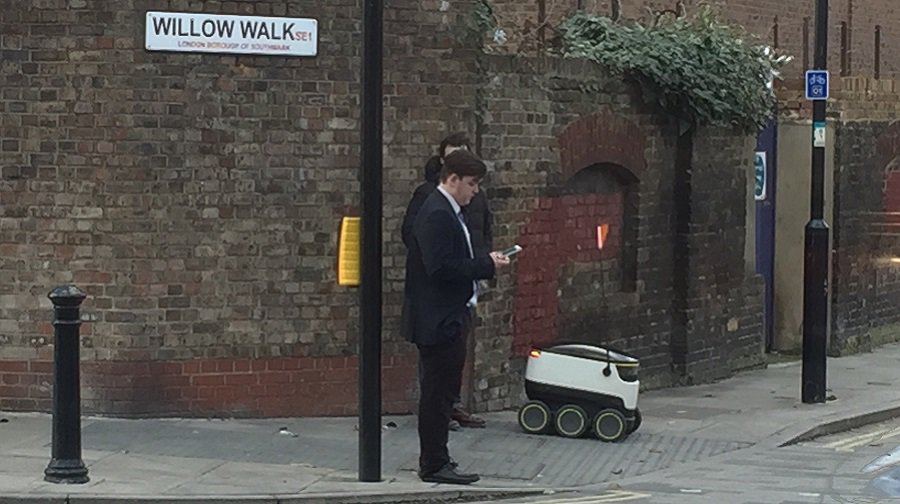 A self-driving robot was spotted zipping along a road in Bermondsey as online food delivery giant Just Eat put it through its paces.

The quirky-looking bot was seen by passersby in Willow Walk as a team from Starship Technologies tested out their six-wheel pavement droid.

The company has teamed up with Just Eat to change the face of home delivery by making the world’s first online food delivery using a self-driving robot.

After five months of exhaustive testing in the area, the first live delivery took place in Greenwich at the end of last year – and the company now plans to expand the service across London throughout 2017.

When Greenwich resident Simone ordered a takeaway from Turkish restaurant Taksim Meze using the Just Eat app, little did she know she was going to be the first person in the world to receive a takeaway food delivery using the technology.

When Simone’s order was received by Taksim Meze, restaurant manager Ana Maria Stingaciu requested that a robot make the delivery.

A robot travelled to the restaurant while the meal was being prepared, before the freshly-cooked food was placed securely inside the robot’s cargo hold.

Ten minutes later, Simone received a text message with a unique link to open the cargo hold of the robot that was sat waiting at her door.

While customers will not yet be able to elect for robot delivery, Greenwich residents who order a takeaway online through Just Eat will increasingly be serviced by the technology as the service continues to roll out.