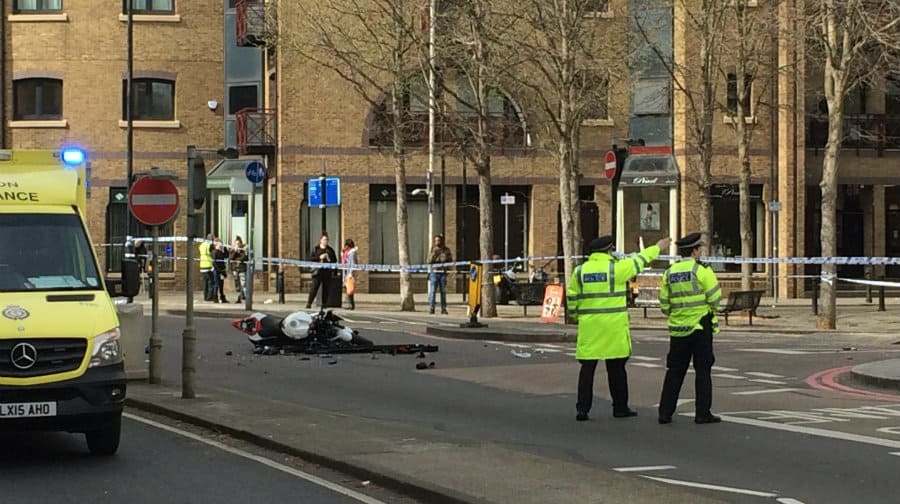 The scene in Jamaica Road following the accident

Eleven years to the day after their 14-year-old friend was killed in a Jamaica Road collision, another accident has sparked road safety protests from a group of Bermondsey residents.

On April 1, a motorcyclist was hospitalised after a collision with a car at the junction of Jamaica Road and Dockhead, an incident that brought back terrible memories for twins Mehmet and Erdo Horrem and their friend Allun Houlihan.

Erdo told the News at the scene of the accident: “This has happened exactly eleven years after our friend Martin Balmer was killed. He was only fourteen. I’m actually having flashbacks.”

Mehmet said: “Something needs to be done, this means a lot to us. The accidents are getting worse. I’ve gone to my MPs, everyone, to get it safer but it’s getting worse.”

While the motorcyclist escaped last week with non-life-threatening injuries, in 2005 Martin was struck and killed while crossing Jamaica Road – something his friends are reminded of every time there is an accident in the same street.

Allun said: “I live in the Arnold Estate and you see these accidents all the time. I have lost three mates to high speed drivers. They should put signs up or railings.”

Martin Balmer, who was killed in an accident in Jamaica Road in 2005

Local politicians have also joined the clamour for road improvements, after a series of recent accidents on the road. On March 29, a car careened off Jamaica Road and into Southwark Park. Last weekend, yet another car crashed into the park’s railings near a bus stop.

Councillor Eliza Mann, a local Lib Dem councillor, said: “The recent accidents on Jamaica Road are terrible. Firstly they remind us of the tragic loss of Martin Balmer and our thoughts are with his family as this must bring back awful memories for them.

“These recent events could have been far, far worse. I have regularly challenged TfL about the removal of the central barriers and I will continue to fight for better safety along this dangerous stretch.”

The motorbike rider was taken by ambulance to hospital

Following the Southwark Park crash last month, Southwark Council Cabinet Member for Adult Care and Financial Inclusion Stephaine  Cryan  added: “There have been similar accidents in the past on this stretch of road, which is why I asked TfL to consider introducing safety measures on this part of the road last year, including introducing speed cameras and also to reinstating the railings that used to be on the edge of the pavement.”

Nigel Hardy, Head of Sponsorship and Road Space Management at TfL, said: “The safety of all road users is a top priority for us and we are constantly reviewing our road network to ensure it remains as safe as possible. We are currently considering improvements that can be made in Jamaica Road, which include provision of the planned Cycle Superhighway 4, and will bring forward proposals for consultation as soon as they are available.”