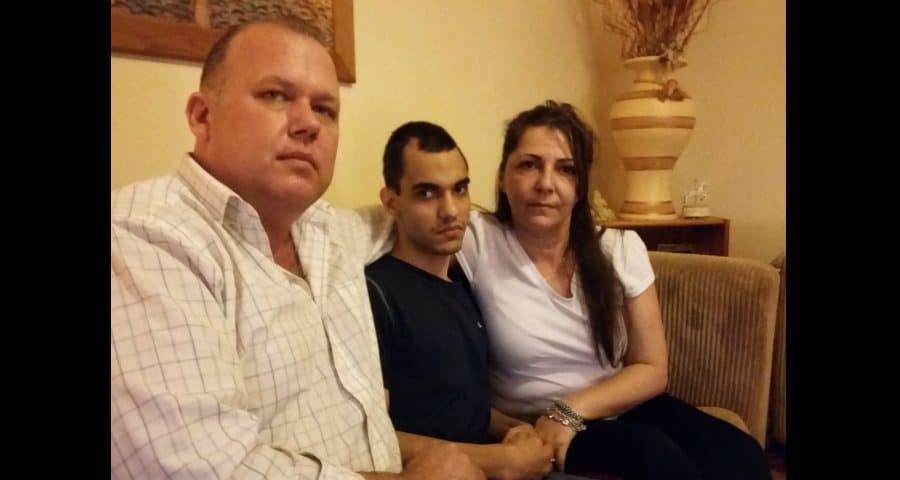 A severely-disabled young man’s family have again been denied a decent council house, despite recommendations from council social workers and occupational therapists.

Joseph and Suzy Bobowicz have been battling since July to find their son, Stefan David-Jones, a home that can accommodate his need for crutches and a wheel chair.

Twenty-one-year-old Stefan is also impaired by memory loss and learning difficulties that make him unable to read and write, and a short attention span. Stefan has also had multiple brain surgeries to treat his hydrocephalus – a condition where a tube is fitted to drain fluid from his brain.

The council’s own occupational therapists and social workers have told the family they deserve to be made a priority for a new, safer home for Stefan. His step-father, Joseph, showed the News a letter they received after a recent assessment by the council’s occupational therapists, which stated Stefan was “likely to become a full-time wheelchair user in the near future”.

The letter reads: “There are inadequate turning circles and circulation space in the present property… The kitchen is not spacious enough to encourage his development of kitchen activities being taught at college, and does not have the space to accommodate him as a future wheelchair user.

Suzy and Joseph, who live with Stefan at their council home in Dylways, near Denmark Hill, also told the News they were given a “priority nomination” for a new council home by Stefan’s former social worker.

But it appears the council’s own social housing department are opposing all attempts to help Stefan, despite receiving the same letter on April 1.

The crushing news was confirmed to the family via a letter from Southwark Council Housing Options on April 27, telling them they have been placed in Band Three rather than Band Two.

Joseph said: “We have been told off-the-record by council officers that being in Band Three means Stefan stands almost no chance of getting adequate housing.

“We have been told there are twelve people with wheelchair needs who are currently on the waiting list for a new house, and who are in Band Two. While Stefan is being kept on Band Three, he will always be lower priority than those people.”

Suzy and Joseph also say the decision to keep Stefan in Band Three is “insulting” because Band Three is defined by the council as people who are “homeless” and “need to move because of their illness”.

“This is ridiculous,” Joseph said, “because Stefan is not ‘ill’ he is clearly severely disabled and his condition is getting worse. With everything he has been through since he was born he is lucky even to be alive.

“We just feel completely alone in this. What we want is to raise awareness with other families so they know this is how Southwark Council treat people.”

Cllr Richard Livingstone, cabinet member for housing, said: “I sympathise completely with this family and the difficulties they are experiencing, it is a difficult situation. But our housing stock is facing unprecedented demand and the housing team has to make difficult decisions to ensure any new allocations or banding follows our allocations policy to make sure the system is as fair as it can be to everyone.

“In this case we have done all we can to make sure a fair and transparent assessment has been made. Following the family’s medical assessment in January our housing officers arranged for an occupational therapist to visit them make a secondary assessment. The family received a new housing score and consequently and new banding was issued, moving them up to band Three on our Housing Bidding scheme, but all assessments concluded that currently there are no grounds to move up to band Two.”

What Councillor Richard Livingstone, cabinet member for housing is quoted in saying in the above article is not entirely true in general and in particular in the last paragraph of the above article. His quote in the last paragraph includes “The family received a new housing score and consequently and new banding was issued, moving them up to band Three on our Housing Bidding scheme, but all assessments concluded that currently there are no grounds to move up to band Two.”

Richard Livingston can you please explain the following to our severely disabled son Stefan. In applying for a suitable adapted home for Stefan back in July of 2015 there were some serious mishaps by Southwark Council. From what we understand the application we submitted was not addressed in a timely manner due to someone changing job positions. Furthermore his formal social worker Kirsten Henriksen advised us the priority housing nomination that she submitted on his behalf was not initially taken into consideration. Sadly at this time with the challenges we have been facing in finding a suitable adapted home for Stefan he has no Social Worker at this time. Even though he was promised one by Kirsten Henriksen’s supervisor Sam McGavin. How is a disabled person left without a Social Worker especially under these circumstances?

As you know Stefan was initially placed in Priority Band Four according to Southwark Councils guide to housing bands. Considering the criteria of Band Four is based on “Reduced Priority and Everyone Else” that makes absolutely no sense to us based on a Priority Band that offers virtually no hope. After the assessment performed by Occupation Therapy on March 31st 2016 Stefan was place in Band Three. Once again this does not make sense to us factoring in according to Southwark Councils guide to housing bands it states Band Three is for “Those who are homeless and who Southwark Council has a statutory duty to accommodate. Families with children or vulnerable homeless people. People living in overcrowded housing. Medical Priority – People that need to move because of their illness.” Over the years we have sent several hundred emails to various individual employed by Southwark Council. Including the Chief Executive Officer, Director of Housing and Director of Social Care to name a few as well as our MP Harriet Harman on Stefan’s behalf. Why? Because his is not capable of reading, writing, has a diminished attention span and once again is severely disabled. As his loving devoted parents we are his voice in fighting for his rights as a British Citizen.

Any rational person at this point would be insulted that our son who is severely disabled has been put into a category which includes ill and homeless individuals (Band Three). Mr. Livingston please feel free to contact us, we would appreciate the opportunity to share facts with you when it comes to how our son Stefan is clearly being deprived of self respect, dignity and quality of life at this point due to know fault of his own. Thanks to certain individuals within Southwark Council / various departments.

Lastly we had an article published in Southwark News on 17 March 2016. You also commented at the end of that article. Please read the comment we left. It states facts regarding the security of our home. Please bear in mind on the 2nd of February 2016 our son underwent his fourth brain related surgery. He has had 13 previous surgeries before being born prematurely and disabled 21 years ago. If he did not have his most recent surgery he was told by his surgeon he would die! On the 4th of February we faced an attempted burglary while our son was still in the hospital. For reference here is a link to the article: /news/family-of-severely-disabled-denmark-hill-man-lost-hope-appealing-to-council-for-a-safe-house/ Once again, please read our comment. We are looking forward to your overall response.