‘Shame on you’ shout protestors at Aylesbury planning meeting 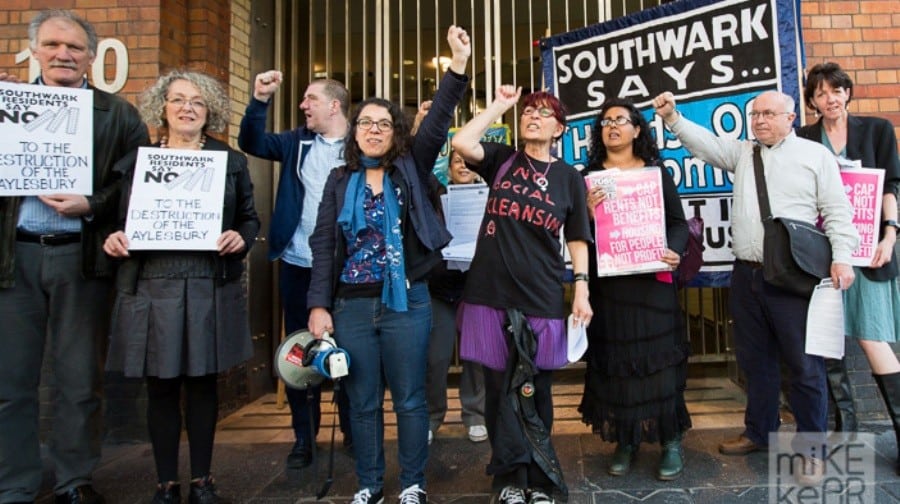 Protesters outside the Aylesbury planning meeting on Thursday night

The meeting at Tooley Street was packed out on Thursday night last week as the Planning Committee considered detailed plans for 830 new homes on the First Development Site, facing Burgess Park, and an overall masterplan for the remainder of the three acre Walworth site.

The chair had to call the meeting to order on several occasions, as leaseholders who feel they are being forced out of their homes to make way for “rich yuppy people” heckled speakers from the Notting Hill Housing Trust and Faraday ward councillors Dan Garfield and Lorraine Lauder, who spoke in support of the scheme.

An objection from Jerry Flynn, of the 35% campaign group, secured a clear definition of ‘social rents’ to be written into the legal agreement between the council and NHHT, so there is no future flexibility on the rents that can be charged.

Phases two, three and four under the masterplan will see 2,745 homes built, as well as a new public square and a health centre.

Cllr Mark Williams, Southwark Council’s cabinet member for regeneration, planning and transport, said: “The regeneration is all about improving the lives of the people who live on the estate, with new homes, better open spaces and community facilities. Half of all new homes will be affordable – higher than any other similar scheme in London, and we are working with Notting Hill Housing so Aylesbury residents can stay in the local area.”

Southwark NewsNews‘Shame on you’ shout protestors at Aylesbury planning meeting