Shane Richie Enjoys Himself in Scaramouche 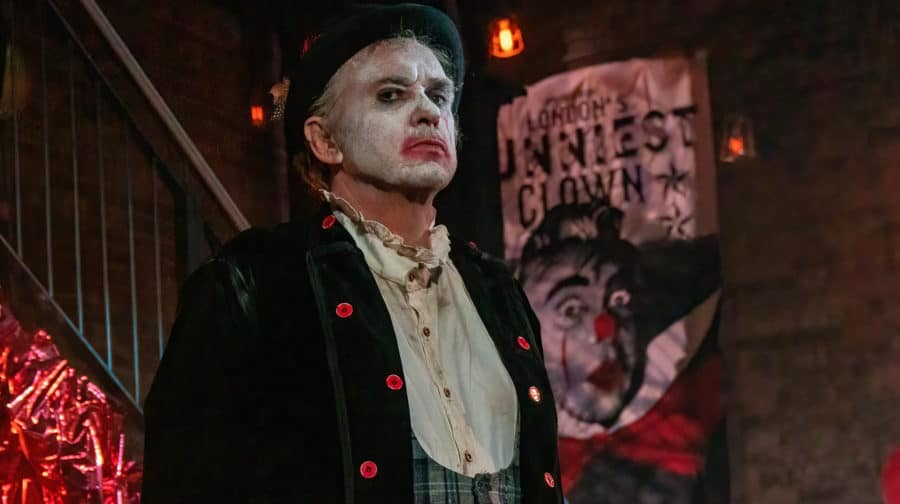 With light appearing at the end of a very long tunnel as Covid restrictions are gradually loosened, Ginger Quiff Media present Shane Richie in Justin Butcher’s one-man show, Scaramouche Jones or the Seven White Masks, for us to enjoy as we get closer to being allowed back into theatres, writes Christopher Peacock.

Originally played by Pete Postlewaite back in 2002, Mr Richie’s turn is filmed for us from the Union Theatre. In the show’s opening moments we view the action through the gaze of security cameras. That is until Scaramouche sets up a camcorder in video diary fashion for us and leaps into the tale of his life. A couple of other cameras pick up angles to cut between but it is the camcorder to which Richie’s performance is played to. 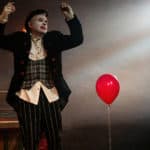 The life story of the pale-faced clown that is Scaramouche Jones is regaled in seven chapters, with the clown impersonating the various characters that have come in and out of a nomadic existence that takes him around the world. The clown is the home of tragic comedy and Butcher’s play hits all the right notes, while Ian Talbot’s production has Richie in faded, smudged tragic makeup reminiscent of Heath Ledger’s Joker in The Dark Knight.

In a time of no live audiences, a video diary presentation has an obvious practical use for delivering theatre but as a dramatic device for Richie to play to, it helps give direction. For a storyteller in a one-man show, starved of an audience, it helps to give a focus to Richie’s performance. The show has moments where the pace dips but then offers moments, especially when multi-roling, where you can tell Mr Richie is really enjoying himself.

Tickets are £15 (plus booking fees) per stream, and can be purchased online at www.stream.theatre