The court heard how his brave victim, who gave evidence via videolink, suffers from serious health problems as a result of the attack 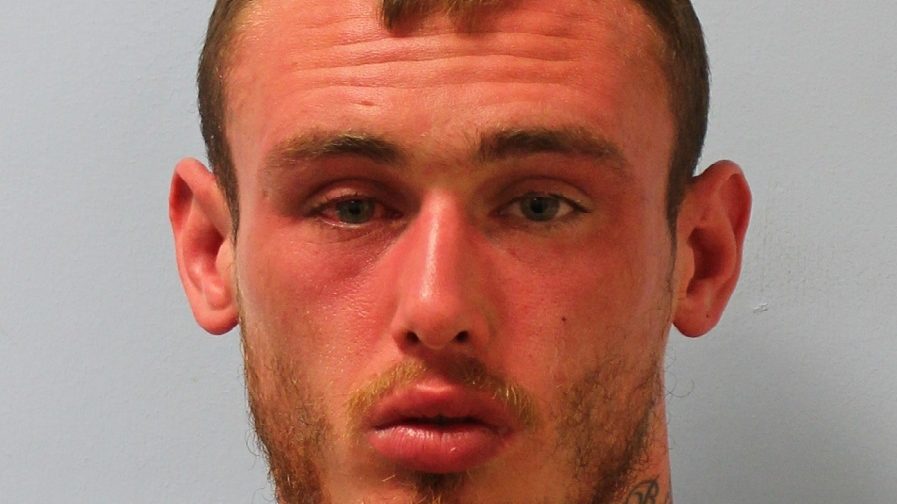 A homeless man, who kidnapped a schoolboy playing tennis and abused him in his Burgess Park woodland lair, was jailed for eleven years today.

Shane Upton, 24, sexually assaulted the eight-year-old in his makeshift tent as a frantic search led by the lad’s mum ensued in Burgess Park.

The youngster told his mother he was going to use the toilet a few yards away while happily taking a tennis lesson with his brother on June 17 this year.

When he came out of the cubicle Upton was standing in his path blocking the exit.

Upton told the terrified boy he needed help finding a house before leading him through the back exit of the toilets and into his den on the other side of the park.

He was arrested near the scene after tripping over during a police chase which involved a helicopter and officers on horseback.

Jurors convicted the paedophile of kidnap, sexual assault on a child under 13, and two counts of causing a child to engage in sexual activity.

Inner London Crown Court heard on Wednesday, January 8, that Upton refused to leave his cell and attend his sentence.

The dock was empty as the court was told how the boy has been left unable to play his favourite sport or go to the toilet on his own.

Adrian Amer, prosecuting, said: ‘The boy said that the man locked in the entrance to the men’s toilets and then locked the cubicle door.

‘The complainant said that he tried to shout for help, but the man covered his mouth with his hands.

“He said that he felt scared and the man told him not to be scared.”

Upton then performed sex acts on him.

“He said this happened for a minute and then it stopped and he did it again,'” Mr Amer said.

Upton then took the boy out of the toilet’s emergency exit.

He walked the boy around Burgess Park and a nearby housing estate for nearly an hour, before taking him to his tent.

“The boy said that the man told him that he lived in a tent and took him to a tent somewhere in Burgess Park,”Mr Amer said.

“The boy said that he was scared when this was happening so he closed his eyes because he wanted it to stop.

“He said that the man stopped when he realised the police were outside the tent.

“The boy said that the man ran off when he realised that the police were there. He said police chased the man and he then ran to the police officers.

“The boy said that he was very scared so he pulled up his pants and trousers and ran out of the cave.

“He said that the incident lasted about three to four minutes and that when he was in the tent he could hear a helicopter.

“Police on foot and on horseback and from a police helicopter conducted a search of the park,’ said Mr Amer.

The court heard today that the paedophile has a history of violent offending dating back to a conviction for arson in 2009.

The judge said: ‘On 17 June  the eight-year-old complainant went, as he and his brother did every week, to tennis lessons in Burgess Park.

“It was something he enjoyed doing, but not anymore. In fact he has not played tennis since that day. This is a result of what the defendant did to him on that day.

“The complainant left the tennis court, where his mother was sitting waiting for the tennis lesson to finish, to use the lavatory.

“It was something he had done before and was capable of doing on his own.

“On this occasion as he emerged the defendant was there waiting. This might have been opportunistic moment but it quickly became carefully planned, because the defendant then locked the door to the lavatory, he removed the complainant’s clothing.

“The defendant then led the complainant out the back to avoid the attention of the cafe attendant but mercifully this was caught on CCTV.

“He led him around the park while the complainant’s mother and the tennis coaches went searching for him.

“Ultimately a police helicopter was deployed and the police located the defendant in the undergrowth with the complainant.

“He has substantial previous convictions, mainly for violence mostly on family members.

“There are serious psychiatric issues facing this defendant, who is clearly autistic and has many other problems as well.

“But [a doctor] found that his resistance to participate [in court proceedings] is entirely wilful and not arising from any mental disorder, psychotic or otherwise.

“The complainant no longer plays tennis. He’s scared of going to Burgess Park, he now suffers from anxiety and he’s had serious health problems, physical problems because of his fear of going to the lavatory and disturbed sleep patterns.”

Upton, of no fixed address, denied but was convicted of one charge of kidnap, one of sexual assault, one of committing an offence with intent to commit a sexual offence and two of causing a child to engage in sexual activity.

The jury cleared him of two charges of assaulting an emergency worker.

They were earlier directed by the judge to clear Upton of a further count of sexual assault.

He was sentenced to 11 years imprisonment and will remain on the Sex Offenders’ register for the rest of his life.

Why do these animals have to do this too innocent children ( or to anyone ) this young lad every time he sees Wimbledon on tv or sees anyoneplaying tennis is going to relive that terrifying hour, 14 yrs is not enough they should get life because that young boy has a life sentence of misery.