Sending Vimal Pandya back to India would be a 'travesty of justice', say residents campaigning for him to stay

Rotherhithe residents are up in arms over the news that a beloved local shopkeeper, a “shining light” who got a letter on behalf of the Queen thanking him for his work with vulnerable people in lockdown, is facing deportation.

Indian-born Vimal Pandya, 41, has lived in Rotherhithe since 2011 and has worked at Halai General Stores near Rotherhithe Street for several years. When the pandemic hit in March 2020, Mr Pandya was one of those people who realised he had to mobilise to help people who suddenly needed support – and soon was helping 55 families with free deliveries and emotional support on the phone.

Knowing that many vulnerable people were worried about coming into shops, Mr Pandya would take food deliveries from Cash and Carry round to customers free of charge. For the food itself, he would charge people the cost price and let them pay when they were able to.

Mr Pandya also spoke to families for hours on the phone to give emotional support. 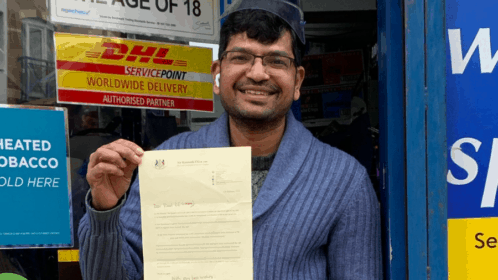 Mr Pandya with his letter outside his shop on Gwent Court, Rotherhithe

Word spread of Mr Pandya’s efforts to help the community and on February 12 last year he got a letter from Sir Kenneth Olisa, the Queen’s personal representative in Greater London.

The letter read: “It has come to my attention that you are one of those people who have gone above and beyond the call of duty to help others during the Covid-19 pandemic.

“I am therefore writing to personally thank you for all of your efforts and to encourage you to continue making a positive difference to Londoners.”

But only a few months after the News reported on Mr Pandya’s heroics, Home Office staff came to the shop and took him to Becket House near London Bridge for questioning. When there, he showed them the letter from Sir Kenneth. Mr Pandya told the News that on seeing the letter, one of them wished him the best of luck staying in the UK.

Mr Pandya’s congratulatory letter sent on behalf of the Queen

The story of how Mr Pandya ended up facing deportation from the UK is long and complicated – and illustrates the often tortuous, uncertain and costly process of making a life in the country.

After arriving from India in 2011, Mr Pandya enrolled in a management course. Two years later, after he had already paid the fees, the college went out of business, taking his money with it. Mr Pandya says he was told by the Home Office to find another college to sponsor his student visa within 60 days.

Mr Pandya found another college and got a two-year visa extension until 2015. The course was going well. But in March 2014, part-way through his studies, the daughter of friends of Mr Pandya’s family, who was living in the UK, got seriously ill.

She was not fit to travel on her own and Mr Pandya took her home to be cared for in India. He stayed with his parents for two weeks before coming back to the UK.

When he arrived at City Airport in April 2014, Border Force agents told him that the college he was studying at had lost its right to sponsor students. He said he was also stripped of his passport and biometric residence card by the agents, who told him they would give him a letter confirming his immigration status.

In a Kafka-esque turn of events, Mr Pandya was then sent to get another student visa without his passport and residence card – the very documents he needed to get the right to stay here. He applied several times to get sponsorship and new English tests that would let him study, spending yet more thousands of pounds in the process, but was still unsuccessful.

By November 2014, he was told he had four weeks to make an appeal, or to go back to India. He decided to appeal, spending nearly £9,000 more on legal fees. A year later, in November 2015 he was told his appeal had failed.

In the intervening period, he has technically lived in the UK without permission, although he has become a “pillar of the local community” whom Rotherhithe residents have called “exemplary”.

A local group have set up a petition calling for Mr Pandya’s deportation order to be revoked and to let him stay in the country.

“During the 2020 lockdown my young family and I saw more of Vimal than we did of our closest relatives,” said Tom Chivers. “He was a shining light in the darkness of the pandemic, providing a friendly welcome as well as practical assistance to vulnerable and shielding people in our community. I call on the Home Office to revoke their decision and to allow Vimal to continue serving the people of Rotherhithe — his home for eleven years — as he has done so bravely during the toughest time in our living memory.”

“Vimal is what can only be described as a pillar of our community,” added Diane Ferguson. “During Covid he made sure that any vulnerable person he was aware of was OK. He shopped for them and obtained goods that were scarce during this difficult time. I know he [still] regularly checks on at least one local resident.

“This lady lost her husband during Covid and his help has been invaluable. He is much loved and appreciated by everyone in our community and returning him to India when his current situation is not of his making but due to Government administrative errors would be a travesty of justice.”

Siobhan Clifford, head of the local residents’ group fighting to keep Mr Pandya in Rotherhithe, said: “It has been my pleasure and privilege to know Vimal Pandya for many years. Vimal is an exemplary person, a true pillar of the community and one of the hardest-working people I have ever encountered.

“Our area here in Rotherhithe would have suffered even more during the pandemic had it not been for Vimal. Nothing was too much trouble for this man, he would always go, without fail, the extra mile for his local community. Vimal worked all the hours possible to ensure that the community had access to food and essential supplies. We were always met with exceptional courtesy, politeness, a kind word and a smile.

“I have no hesitation in saying that if we had more citizens like Vimal, with his sense of community spirit, wonderful manners and ‘can-do’ attitude, this country would be a happier, more successful, less divided place.”

The Labour member for Bermondsey and Old Southwark said: “The Government should reward those who went above and beyond during the crisis. Whilst Ministers were partying in Downing Street, in Rotherhithe this shopkeeper was out delivering to vulnerable neighbours.

“He deserves to be treated better and I hope the Home Office reconsider the issue fast.”

Mr Pandya says that Rotherhithe is home for him now, with his flat, job, and long-term girlfriend in the area. She is my rock, she is my pillar, she is the constant source of my energy,” he said.

“I do not want her to get involved in [the visa process]. This is my problem. I don’t want her to feel like I’m with her just to get the papers. I always believe it’s my battle and I need to deal with it. She is always there, supporting me, right behind me.”

He spoke of the difficulties he would face going back home, given that the people he grew up with have moved on.

“Going to India is going to put me in real misery. How am I going back to India to face up to the reality? The friends I grew up with are in a really good place. It’s so bad. I don’t know what will happen. At least living here gives me some hope.”

He also remains in debt from the vast fees required to apply for visas. Altogether, he has spent about £38,000 trying to get his immigration status settled through sponsorship applications from colleges, visa applications to the Home Office – and huge legal bills.

Sadly this was money that he often didn’t have – he has had to borrow money and his parents back in India, who even sold their house in order to help him stay in the UK. Mr Pandya is still paying back the interest on his loans.

The Home Office is set to make a decision on Mr Pandya’s future later this month. If he is allowed to stay, Mr Pandya said he was thinking of going into finance – which he originally studied in India – but he also loved working with people in the shop in Rotherhithe.

A Home Office spokesperson said they did not comment on individual cases.

They added: “We are committed to an immigration policy which welcomes those in genuine need but which deters illegal immigration, prevents the abuse of benefits and services and removes immigration offenders from the UK.”

Vimal is an amazing man who has done nothing but work hard and pay his way since he came here. He has been an angel in our community long before the pandemic and should be congratulated and celebrating for his beautiful kind heart. Anything anyone of us Local people can do to help support him we will. We will not stand for this and it will not be taken lightly at all if anything happens to our friend who is like family to all of us!