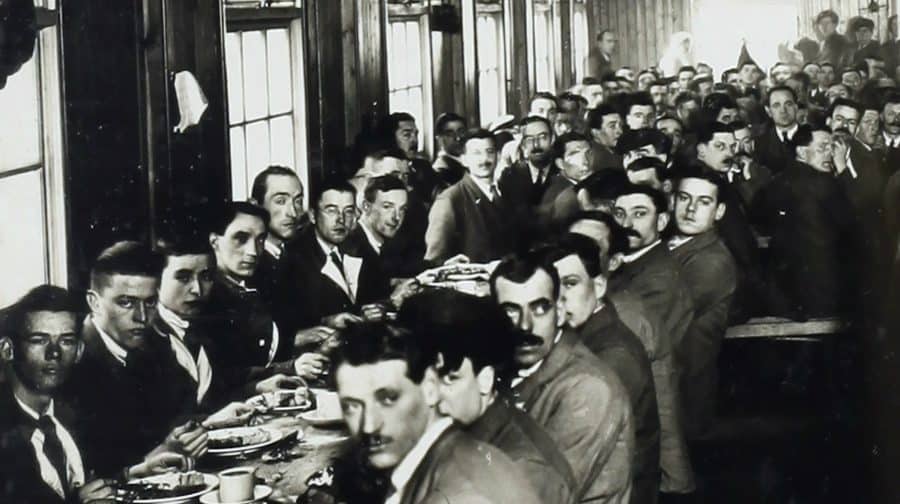 Soldiers at the pioneering Maudsley Hospital. Copyright Museum of the Mind

Rare photographs have gone on display for the first time this week showing when the Maudsley Hospital in Southwark was a pioneering centre for the treatment of shell-shocked soldiers during World War One.

Conceived in 1907 as a place of sanctuary for people with psychiatric disorders in the age of the ‘lunatic asylum’, the Maudsley was taken over for the war effort before it could officially open. Shortly after the building was completed in 1915 it was requisitioned by the army and took in its first soldiers on January 6, 1916.

Over the next three years The Maudsley treated 12,400 cases of shell-shock and became renowned for its ground-breaking treatment and research of psychiatric injuries. Temporary platforms were built west of Denmark Hill station, so patients suffering from severe cases of psychosis could be transported to the hospital away from sick or wounded troops – who could have been ‘demoralised’ by their visible distress.

Initially the hospital had six wards – two for assessment and four for treatment – with144 beds in all. By 1917, it had expanded to 450 beds to treat 185 soldiers with shellshock and other acute mental disorders. The facility was named after the co-founder and eminent psychiatrist, Henry Maudsley, who developed the idea with the biochemist Frederick Mott.

While people with mental health conditions were largely being locked up, heavily sedated or both, Mott and Maudsley prescribed daily hot baths, good food, exercise and plenty of ‘distraction’. Within the calm, lilac-painted walls of The Maudsley there was a gymnasium, a carpenter’s workshop and a vegetable patch.

The nurturing environment challenged every concept of psychiatric care at the time and the treatment offered at The Maudsley ‘war clinic’ informed what later became known as Occupational Therapy. If military records still exist of what took place at The Maudsley, they are kept under lock and key. A collection of photographs owned by the Bethlam Museum of the Mind are the only ones which tell the story of the brave new world of The Maudsley between 1916 and 1919.

They are now on display in an exhibition called The Maudsley at War in The Long Gallery at the Denmark Hill site until September 24. Opening hours are Monday to Saturday, 9am – 5pm.