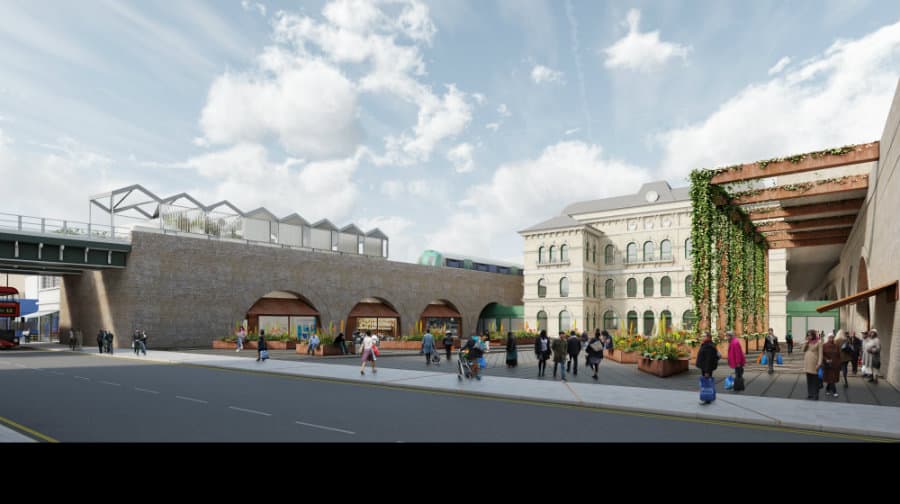 Businesses in Peckham Rye Station’s arcades are nervous about the outcome of a council meeting that could seal their fate.

Southwark councillors on the authority’s planning committee will vote on Tuesday whether to give planning permission for the arcades to be razed and replaced with an outdoor square.

Designs submitted by the council with Landholt and Brown Architects incorporate shop spaces in the arches to overlook the square, and large metal planters to support Platform Three.

The application also includes a two-storey extension to the building at 2-10 Blenheim Grove to provide spaces for a restaurant, office spaces, a takeaway, and public toilets.

But it means Peckham stands to lose its TSB bank, Jenny’s Café and several independent traders in the arcade if the green light is given.

Qin He, 25, who runs the Steamer Chinese and Japanese food bar with her husband, said the redevelopment could force them out of town.

“We only moved here nine months ago, but we only heard about it recently, so this came as a shock,” Qin said.

“I’m local, and I would like Peckham to become more beautiful. But this should really be a place for business and for people to make money to provide for their families. It shouldn’t be a big open square. If people want open space they can go to Burgess Park. I worry that after it’s done the businesses that move in will be Starbucks and big chains. It’s only fair that local people should have priority. And it would be impossible for us to start a business outside Peckham because my son goes to school here.”

Shahid Butt, 31, who manages the neighbouring Food Base grocery shop, said: “It will definitely affect us.

“The council hasn’t spoken to us about it since last year, but I told them it would mean we have to relocate and that would kill our business.

“The problem is I don’t see anywhere nearby that we could move to where our customers could still find us. I’m worried by it and I don’t see why they need to change everything around.”

The issue of locals being left in the dark, despite the council promise in 2014 for a ‘co-design’ planning process, has angered Peckham Vision campaigner, Eileen Conn, who helped spearhead the campaign for the station’s revamp.

“The handling of this process has flown completely in the face of what was meant to be a collaborative process, and has been utterly un-transparent” Eileen said.

“There are 96 documents and there is no guidance as to where key info can be found in them. Then further amended documents were posted late in the second consultation period without notice.

“The failures of the consultation process at this stage compounds the problems there have been throughout, since the promise from the council and Network Rail of working with local people as full partners in shaping the scheme”

* Have your say on planning