The audience are faced with an agonising decision: accept the money or reject it? 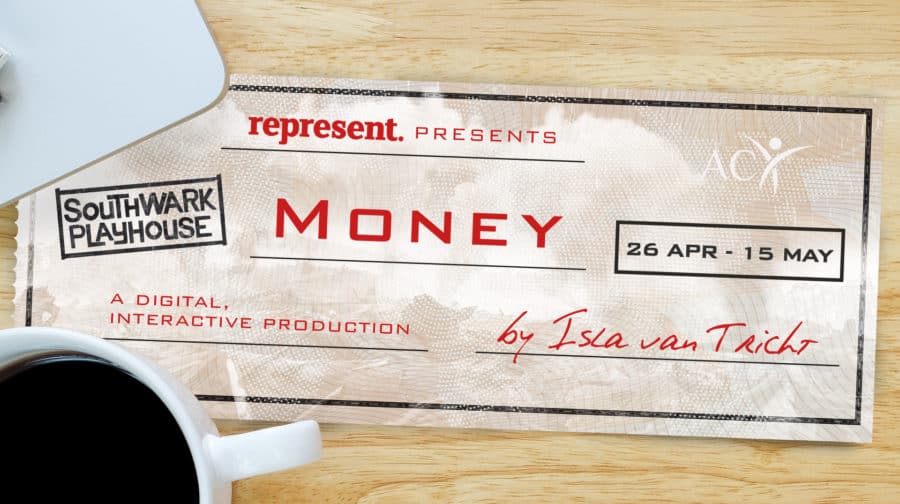 Represent, a company with the aim to increase access to the industry for those from lower socio-economic backgrounds, announced a world première digital co-production with Southwark Playhouse: Money by Isla van Tricht, which invites audiences to interact with, and determine the outcome of, a charity as it grapples with the ethics of accepting a large donation from a questionable source. They will choose which breakout rooms to go into at different points in the play – and therefore what secret agendas and stories they overhear; in the end, they will vote on whether to accept the money with several possible endings depending on the result.

The Nyoni Youth and Community Project is offered a large donation from the Anders Corporation that promises to save the struggling charity. The source of the money is, however, an ethically questionable one and, as the details of the Anders Corporation’s dirty and damaging deeds come to light, the Nyoni Board – and the audience – are faced with an agonising decision: accept the money or reject it?

Secrets will be spilled, hidden and traded; loyalties and rivalries will be formed and broken as the charity’s board wrestles through the muck of this ethical dilemma and discussions soon spiral from professional to personal.

Money will feature Mel Giedroyc in a cameo role as Jennifer Anders, the CEO of ethically dubious, highly successful Anders Corporation whose foundation have granted the donation.

Creative Director of Represent, Guy Woolf today said, “Last year we were all raring to go with our first season but one week into rehearsals the world stopped. Since then we have continued our commitment to our company with a variety of workshops and R&Ds… We commissioned Isla van Tricht to write the piece for a virtual and interactive production in which our audiences are put right at the heart of a timely ethical dilemma that confronts capitalism, philanthropy and a group of people doing their best… Due to the effects of the pandemic, socioeconomic inequality in our industry is now more pronounced than ever. As a result, there has never been a more important time to represent.”

Southwark NewsNewsShow Me The Money