The former drag queen Stephen Bacon lost his life to cancer in June last year, after forging a friendship with the Cancer is a Drag charity 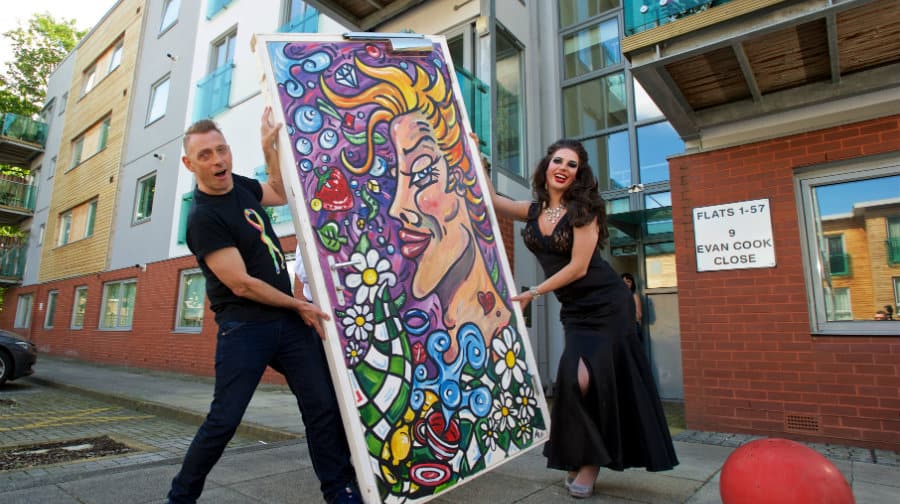 The fabulous front door to a Peckham apartment will be auctioned to charity this summer in memory of its famous drag queen owner, who died of cancer in June 2015.

Stephen Bacon, known on stage as Lady La Rue, was living in the apartment on Evan Cook Close towards the end of his life. The door was painted by Stephen’s close friend and artist Tristan Peneiro to cheer him up, and shows Stephen as his Ms La Rue moniker.

Just over one year since his death, the door will be auctioned to raise money for the charity, Cancer is a Drag, which Stephen’s turned to for support during his chemotherapy.

Bermondsey man Alan Bugg, who founded the charity in 2012, said: “We were over the moon when the woman living Stephen’s old flat got in touch with us and her housing association, Wandle, and helped us put on this auction.

“The drag queen who’s standing with me in the photo is also Stephen’s old flat mate, Nathan Kiely, whose stage name is Topsie Redfern.

“Stephen was an amazing beneficiary of Cancer is a Drag. He and I became very close friends while we were both undergoing chemotherapy.

“This auction is a fantastic way to remember him and raise money to support others on their journey.”

Alan set up the charity after he was diagnosed for a second time with cancer returning to his abdomen. It has since raised more than £20,000 for Macmillan cancer support and local hospital wards.

Ahead of the auction, the door will be displayed in the foyer of the Chelsea Theatre during the run of drag musical ‘Heels of Glory’ in June 2016 before being taken to the Legends Bar in Stephen’s hometown of Brighton.

The winner of the auction will be announced at ‘Cancer is a Drag Presents: A Cabaret’ at the Royal Vauxhall Tavern on Wednesday August 31.