Southwark has the largest Sierra Leonean diaspora in the UK 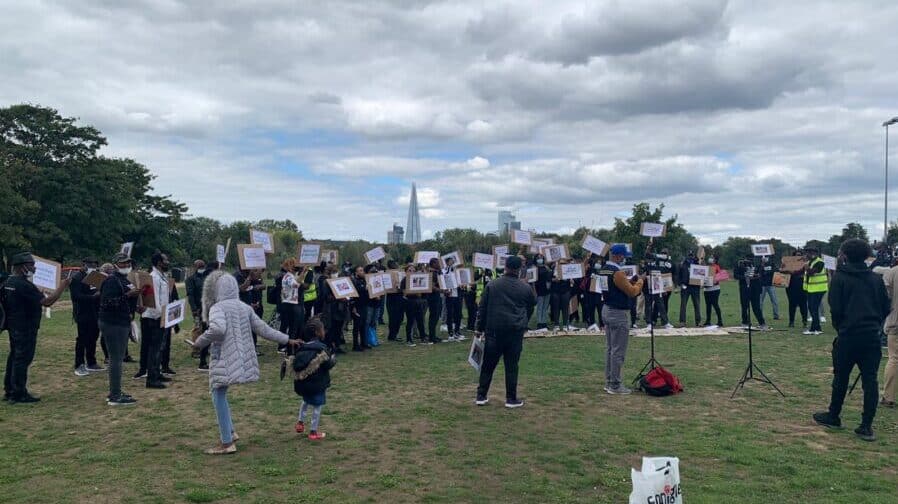 A coalition of Sierra Leonean groups staged a vigil in Burgess Park, highlighting alleged victims of political violence and intimidation across the West African country.

Held on Sunday, August 31, the protest saw groups including Like Minds for Makeni, Concerned Sierra-Leoneans-UK, and the Black in the Park Network, commemorate ‘victims of state sponsored violence’.

Southwark is home to the UK’s largest Sierra Leonean diaspora, many of whom live in Neil Coyle’s Bermondsey and Old Southwark constituency.

Coyle, who was appointed to the House of Commons foreign affairs committee in May, hopes the cross-party group will focus its attentions on the situation in Sierra Leone in upcoming sessions. A vigil was held for alleged victims of political violence

Although the election was observed as free and fair, reports of political opponents being targeted and held as political prisoners have continued circulating.

Since winning the election with 51.8 per cent of the vote, Bio introduced a landmark free education for primary and secondary schools and set up a commission to investigate claims of corruption led by previous president Ernest Bai Koroma’s administration.

In September that year, Coyle questioned then Africa minister, Harriet Baldwin, in parliament about what assessment had been made of the level of political violence and arrests in the country.

In a reply, the minister said power had been transferred peacefully, but the government “was aware of recent allegations of politically motivated violence and we continue to monitor the situation”.

She added: “The new government have made a commitment to govern for all Sierra Leoneans, and I call on them to honour that pledge and ensure due process in all cases.”

Coyle’s comments earned him a strong rebuke from the Sierra Leonean government’s head of strategic communications, who branded the allegations as ‘baseless and sensational untruths’.

This week the News contacted the newly formed Foreign, Commonwealth and Development Office for a response to the protest and its organisers’ concerns.

“The UK has a close and historic partnership with Sierra Leone and we continue to support it with vital UK aid to build a safe and prosperous country,” said a spokesperson.