Simon Hughes says his ‘commitment to Bermondsey and Southwark continues’

Despite his defeat, Mr Hughes is as keen as ever to fight for Bermondsey - and refuses to rule out running again. 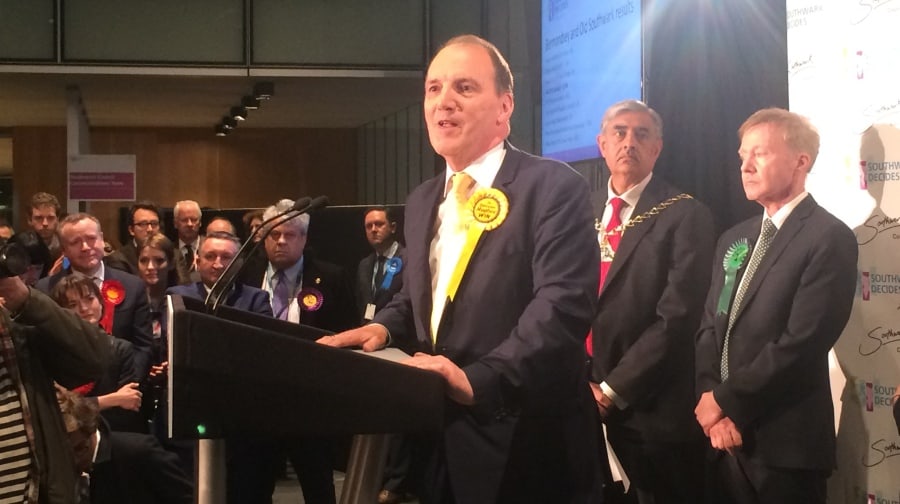 Simon Hughes may be newly-unemployed but that doesn’t mean his diary is suddenly wide open.

In the few days since his election defeat to Neil Coyle, the Lib Dem veteran has had 6am, 7am and 9am starts – and he generously counted the latter counted as a ‘lie-in’.

But once the media circuit ends and his parliamentary responsibilities are cut, he is anticipating a well-earned – if unplanned – rest.

He said: “I’m going to chill out a bit, have a week off, go and watch a bit of the cricket in the Test series. I’ll probably go to Wimbledon, which I haven’t been able to do for a couple of years.”

For a politician who has been working solidly as MP for 32 years, the idea of a ‘chill out’ must be something of a novelty – and not necessarily a welcome one. His defeat was shocking in its comprehensiveness and not something Mr Hughes was expecting.

But he didn’t win and the 4,489 vote defeat to Labour’s Neil Coyle clearly smarts. He references ‘mega amounts of money’ spent by Labour campaigning in the area and bemoans how the borough’s anti-Tory mentality hindered his party’s progress.

“My analysis is that in the last week of the campaign people were focusing on the question ‘Do you want a Cameron government or do you want a Milliband government?’ The fear of Cameron being PM again trumped some people’s support for me.”

Equally worrying from Mr Hughes’ point of view is the ‘one-party state’ developing in Southwark. He said: “We have three Labour MPs, a Labour council and a Labour representative for the Greater London Assembly. The only people who are able to be in opposition locally are our thirteen Lib Dem councillors in four wards. They are literally the thin yellow line between everyone else. We have effectively a one-party state and that’s really unhealthy.”

He also doubts his successor’s ability to confront his party on behalf of his constituents, especially if he stays on as councillor.

“Who knows how much influence he’ll be able to have? If he’s a Labour councillor he’ll be subject to the Labour whip. I’ll be interested to see how many times the new Labour MP will vote against party lines. I don’t expect him to be regularly rebelling against the party leadership – at the moment his leader is Harriet Harman!”

Will Mr Hughes run again in five years? While he tried to avoid giving a concrete answer – ‘that’s not a question just for me but for the party and we haven’t had that conversation yet’ – he is clearly reluctant to completely rule out trying to win back his seat.

“I’ve lost elections before. I don’t go and curl up and hide in the corner. I’m not going anywhere, so I hope people will realise that my commitment to Bermondsey and Southwark continues.

“Alfred Salter, who started life as a Liberal, lost his seat before standing again and winning. Other Liberal MPs have stood and been defeated and come back and won. It’s not impossible.”