One person was hospitalised 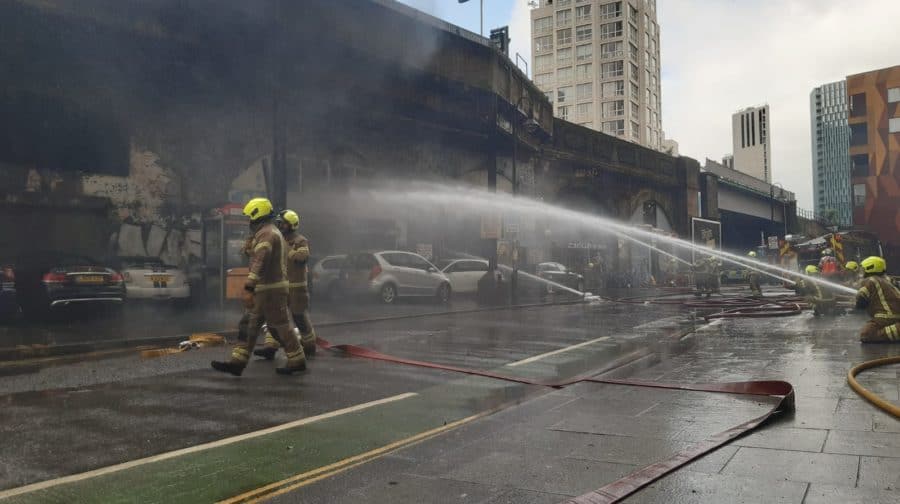 Fire crews remain at the scene

Six people were treated by paramedics at the scene of a devastating fire in Elephant and Castle, London Ambulance Service has confirmed.

Just one of those given assistance needed to be hospitalised.  The Met has also confirmed that one of its officers was treated by paramedics for smoke inhalation.

Officers had helped evacuate the rail and underground stations and both residential and commercial buildings close to the fire.

Emergency services were called to Elephant Road at 1.50pm as a huge blaze ripped through the arches next to the overground train station at the junction with New Kent Road.

By mid-afternoon three commercial units, six cars and a telephone box were all ablaze.

The fire, which police say is not believed to be terrorist-related, was brought under control by 4pm by 100 firefighters.

The smoke coming from the fire was so thick that residents were told to keep windows and doors closed. Plumes of black smoke could be seen from across south London and into the city.

Motorists and commuters are still advised to avoid the area. Disruption to train services is expected to continue into the night.

A London Ambulance Service spokesperson said:  “We were called at 1.50pm today to reports of a fire near Elephant and Castle station.

“We sent a number of resources, including ambulance crews, incident response officers and our hazardous area response team.

“We treated six patients at the scene, and took one of them to hospital.”

READ MORE: Huge fire breaks out at Elephant and Castle