But infections could, finally, be starting to fall

The number of COVID-19 deaths in Southwark is quickly rising for the first time since May after weeks of escalating hospital admissions.

According to the government’s latest data, sixteen deaths in Southwark were recorded between Monday, January 4 to Sunday, January 10. These figures are based on deaths recorded within 28 days of returning a positive test result. Seven deaths were recorded in the previous week, and five in seven days over Christmas.

Throughout the whole of October and September, no deaths were recorded and, in late autumn and early winter, were hovering at around one or two a week – if any.

Doctors say the most accurate way of measuring the impact of the virus is to look at the overall number of deaths where COVID-19 has been listed on the death certificate, often as a contributing factor. When looking at this data, 271 have been recorded since February 2020.

Since cases skyrocketed in December as the new variant took hold over London and huge parts of south-east England, hospital admissions have also risen.

There is always a period of some weeks between rising admissions and deaths, as people often deteriorate after being ill for several weeks, and can spend weeks in intensive care before they pass away.

However, advances in care, improved treatments, and the most vulnerable people being more likely to shield this time around compared to the early days of the pandemic means that we are not seeing the same mortality rate as last year.

The vast majority of people to be infected with the virus will recover – most with no medium or long-term side effects. Around a third of people infected are believed to be completely asymptomatic.

But a significant minority do need hospital treatment. And although the most vulnerable groups are those over 80, and with particular chronic conditions including diabetes, lung conditions, and heart disease. But they do not make up all those who are hospitalised. According to NHS England, a quarter of all those admitted to hospital with the virus are currently under the age of 55.

There are early signs that the number of daily, new infections may be starting to fall across London. In Southwark, there were 311 positive test results reported on Tuesday, (January 12), compared with a high of nearly 700 at the end of December. If this trend continues, it is a clear sign the latest lockdown is working and will buy valuable time for the vaccination roll-out. 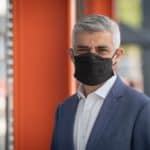 The critical question is whether the fall will be sustained, and whether it comes in time to prevent disaster in the NHS. Admissions rose by nearly a quarter in the first week of January, leading London Mayor Sadiq Khan to declare a ‘major incident’, akin to a terrorist attack or disaster, due to the pressure on the NHS.

Firefighters and police officers with ‘blue light’ driving experience have been drafted in as ambulance drivers to help respond to a record 8,000 urgent calls a day – up from the usual 5,000 in busy periods. There are currently huge numbers of COVID-19 patients in all local hospitals. As we reported last week, King’s College Hospital is close to being ‘completely full’ due to the pressure on its intensive care beds.

There were 622 at King’s as of Tuesday, January 5, 90 of whom were in intensive care and dependent on mechanical ventilators. Urgent cancer surgeries have been delayed at King’s and across other hospitals in London.

London’s Nightingale Hospital, in the Excel, has also reopened and started admitting non-Covid patients to free up bed space, after previously being put on standby in May last year.

In an effort to free up bed space for patients, King’s College Hospital is now discharging COVID-19 patients into hotels once they are ‘medically fit’ to be discharged. The trust says those being sent to Best Western’s London Hotel Groups are mostly homeless patients with nowhere suitable to live once they are in recovery.  The chain says it has capacity to offer 5,000 beds to recovering COVID-19 patients – in a similar initiative to the work housing rough sleepers during the early days of the pandemic.