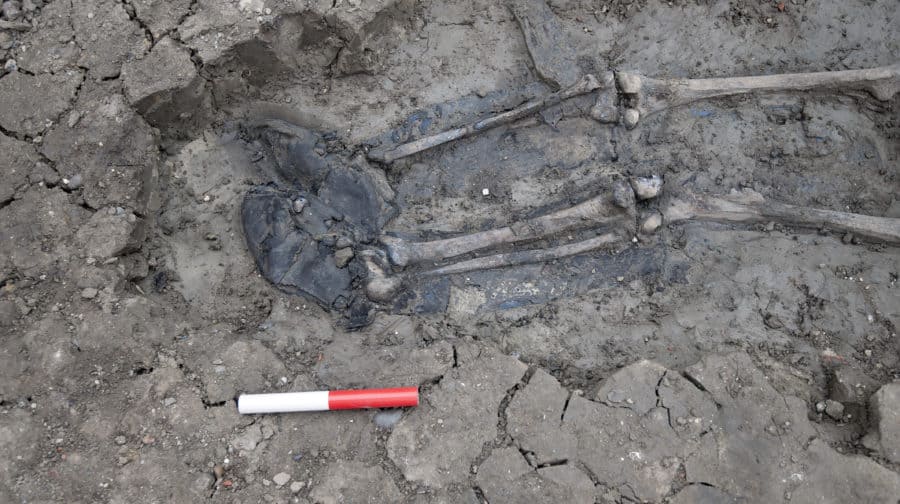 Archaeologists working on a super-sewer site in Bermondsey have discovered a skeleton lying face down in the mud – still wearing a pair of thigh-high leather boots.

Specialists studying the skeleton and his boots, uncovered by MOLA Headland archaeologists working at Chambers Wharf, believe they date to the late 15th or early 16th century.

The rare find has sparked a drive to uncover the mystery around the man’s death.

Archaeologists believe that the boots, made of a material expensive at the time, could possibly have been used by the man to wade through the sticky Thames mud.

Experts speculated that the boots, reinforced with extra soles, meant the man made his living from the river – which may have contributed to his untimely death. Beth Richardson, Finds Specialist at MOLA Headland, said: “By studying the boots we’ve been able to gain a fascinating glimpse into the daily life of a man who lived as many as 500 years ago.

“It has been a privilege to be able to study something so rare and so personal.”

The curious position of the man – believed to have been under 35 when he died – face-down, with an arm above his head and the other bent back on itself to the side, might also indicate that he drowned during his river work. Osteology experts from MOLA Headland found deep grooves in the man’s teeth suggesting a repetitive motion like passing rope through his teeth as a fisherman might.

However his bones also revealed a life full of toil – made even more uncomfortable by suffering from osteoarthritis.

Beth Richardson, Finds Specialist at MOLA Headland, said: “With the booted man, examining his teeth has given clues about his childhood and marks on his skeleton have allowed us to proffer ideas about the aches and pains he may have suffered from on a daily basis, the toll his job took on his body and even a little about what he might have looked like.”

The skeleton was uncovered during the construction of a shaft at Chambers Wharf, where one of the main tunnel boring machines digging the super sewer is due to start tunnelling later next year.

The £4.2 billion Tideway project is to create a tunnel through the River Thames to control sewer overflow discharge.