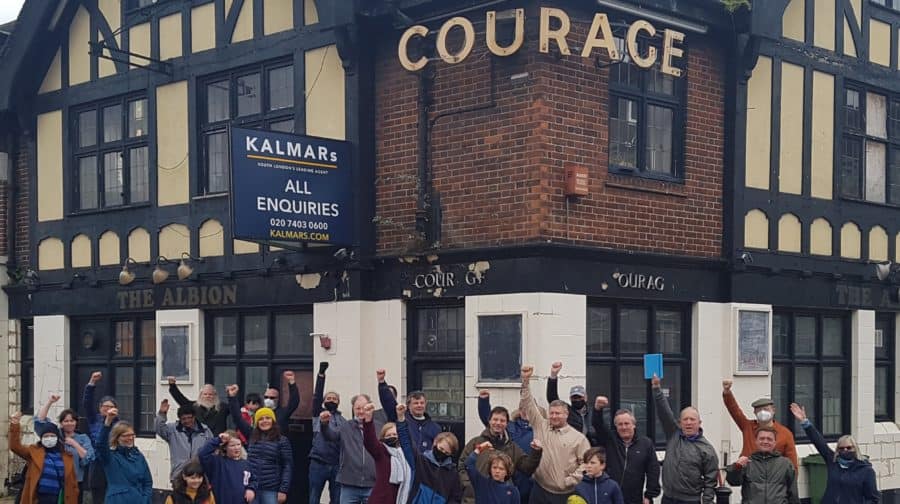 People outside The Albion former pub earlier this year

Rotherhithe locals are celebrating a “small victory” after the owner of a beloved former pub lost an appeal that would have let them build even more flats on the site.

The Albion Pub on Albion Street, near Lower Road, is slated to be demolished and turned into a four-storey building made up of eight flats and a wine bar, after permission was granted to its former offshore-registered owner in 2019, despite a campaign by Rotherhithe residents to ‘save’ the pub.

The owners also wanted to add another storey on top but permission was refused in February this year. An appeal was dismissed in a ruling released on November 11 after a site visit.

Planning inspector Chris Baxter said the proposal to add another two-bed flat on top of the new building would be “harmful” to the grade-II listed St Olav’s church opposite the former pub site.

He added that the height of the proposed new building “would sit uncomfortably within the existing street scene of Albion Street” and “would appear as a dominating feature that would detract from the existing built form in the immediate area.”

The new flats would bring some public benefit to the local area, the inspector said – but not enough to outweigh the concerns about height and the effect on the listed church. 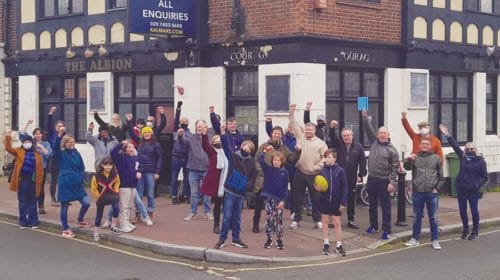 Campaigners gathered outside the pub

Local resident Michael Robertson, who was part of the campaign to stop the pub being turned into flats in the first place, said: “This is a small victory in a wider community driven campaign to retain the magnificent Albion pub building and see it returned as a public house.”

The former pub was put on sale earlier this year for £1.25m, and appears to have been sold recently to new owners, Wedgemore Albion Street.

The new owners also recently applied to the council for permission to increase the height of the new building by 1.27 metres. The company says this will soften the noise coming from the bar into the new flats, and will give the accommodation higher ceilings.

Although the new ruling does not affect planning permission to knock down the former pub, Mr Robertson and his fellow campaigners are determined to keep fighting.

Campaigners argue that the loss of the pub would be a heritage issue, given the building’s distinctive mock Tudor design. The property is not listed but is considered a non-designated heritage asset by Southwark Council. The 2019 planning application dismissed the pub as “plain” and “a typical example of an interwar Neo-Tudor public house, which are very common”.

The chairman of the residents’ association for the Clegg, Murdoch and Neptune houses near the pub wrote in a comment objecting to the original planning application that: “The Albion (1928) is almost exactly contemporary with our estate (completed 1929) and both are good examples of late arts and crafts style architecture. They were strongly influenced by the garden city movement of Ebenezer Howard and tried to bring some of the attributes of rural vernacular buildings to the inner city…

“Rotherhithe and Bermondsey residents have witnessed dozens of their cherished boozers lost to the wrecking ball in recent years,” a spokesperson for the group told the News in March. “They are now saying enough is enough.”