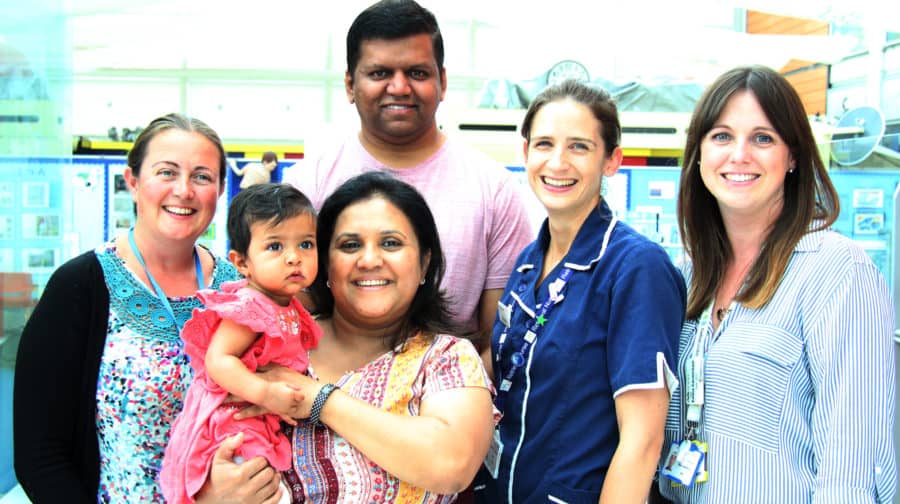 The smallest baby in the UK to receive life-support treatment at Evelina Children’s Hospital in Waterloo celebrated her first birthday this month.

Reva Malvankar was born premature at just 30 weeks last year and in her first few weeks developed an infection that had her hospitalised.

After six days in intensive care at St George’s Hospital with her condition deteriorating she was sent to Evelina London for last-chance treatment to save her.

At the children’s hospital she was cared for by the specialist Extracorporeal Membrane Oxygenation team.

This type of treatment temporarily replaces the work of the lungs or heart, allowing the organs to heal.

It continuously takes blood from the body, adds oxygen, removes carbon dioxide and then returns it to the body.

The procedures carries higher risks for smaller babies, and had never been attempted on a baby as small as Reva before in the country.

When she arrived at Evelina, Reva weighed just 4lb.

Her mum, 42-year-old Parnika Bhor, from Surrey, said: “Reva didn’t have any serious medical problems and after spending six weeks in the neonatal ward at our local hospital we were discharged home.

“After three weeks at home she developed a respiratory infection. At first she didn’t seem to be in any major discomfort but her temperature was very low.

“She then started to become very floppy so we took her to our local A&E. Her condition continued to deteriorate so after a couple of hours she was transferred to St George’s Hospital.

“She spent six days there but there was no change to her condition.

“We were told that the respiratory infection was stopping her lungs from working properly and her life was in serious danger. We couldn’t bear the thought of losing Reva. We were completely broken.

“The team at Evelina London explained that Reva would need a special type of ECMO because of her small weight and that it was her only option left. It was extremely distressing seeing her tiny body hooked up to such a big machine.

“After ten days on ECMO her condition started to improve. Gradually the team reduced the amount of support her lungs were getting from the machine. Reva wouldn’t be alive today without it.

“I’m eternally grateful to Evelina London for the care she received.”