Soldiers ‘dig for victory’ in Nunhead 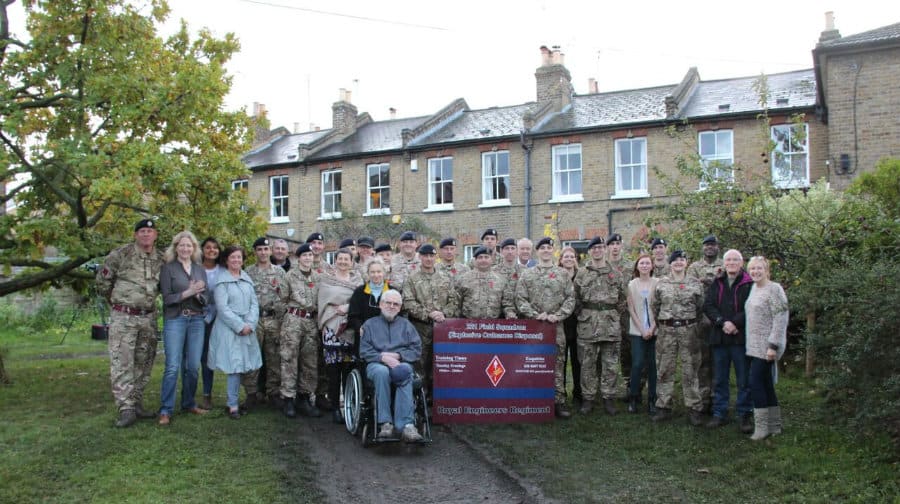 A disabled man was led down the garden path on Saturday, after a squadron of bomb disposal soldiers came to his DIY SOS.

The band of eighteen army reservists descended on Nunhead Grove in their fatigues to lay a new track for wheelchair-bound Jeremiah Sheenan, from his house, across the green, to the pavement.

Jeremiah, who suffers from Multiple Sclerosis, said he had been “humbled” by how the community rallied around to help him.

One of the lads from Catford’s 221 Field Squadron, told his Captain, Tom Roach, how his neighbour Jeremiah was increasingly housebound due to his illness and had difficulties getting out in his wheelchair.

On hearing of what the soldiers were planning to do, Ian Messenger, the Branch Manager of Buildbase in Peckham, donated all the tools and materials for free.

Then on the day, all the neighbours supplied endless cups of tea and offered their facilities to the soldiers. Even the local pub got in on the action when the Man of Kent brought free beers out for the troops.

“I thought it was amazing,” said Jeremiah, 58. “I didn’t think that I deserved this stuff. It made me feel special, like I was getting help that I knew I needed, but I was not about to ask for.”

Jeremiah, who was a keen cyclist before his illness left him virtually housebound, said the new garden path would change his life…. “that’s how much it means to me.  I can’t thank them enough for what they have done for me.  Bless our Armed Forces,” said Jeremiah.

Captain Roach said “It’s really great to work with local people who want to help – it makes all our efforts worthwhile. Within a few hours of publishing the request for support in the unit, we had eighteen volunteers and we agreed the date of November 7, the day before Remembrance, as it’s what our brothers in arms would expect of us.”