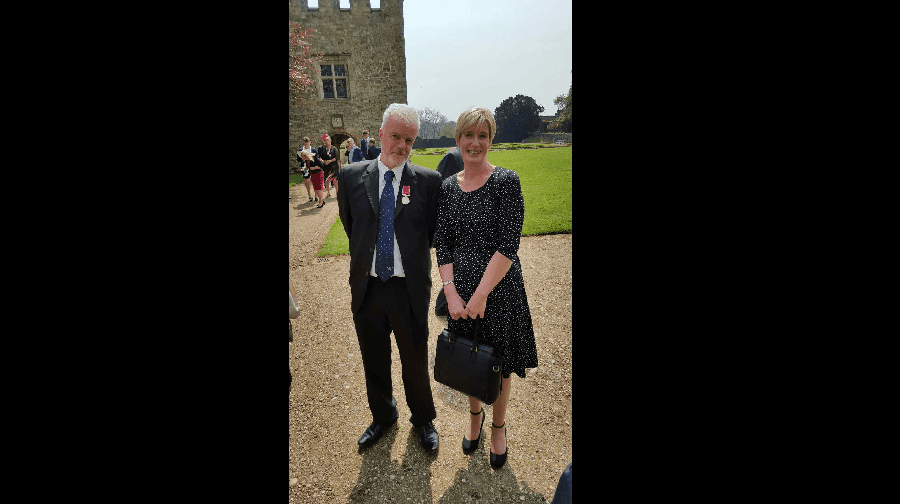 Sean McCarthy and Helen, an organiser

A Millwall fan was awarded a British Empire Medal on May 12 for his outstanding poppy selling efforts, writes Alex Yeates…

Sean McCarthy, a familiar face to Lion’s fans, takes two weeks’ holiday off work each year to run the stand outside Cannon Street station, usually from October 28 to November 11. He has raised around £278,000 over seventeen years.

As well as selling poppies, Sean sells unique badges each year featuring Millwall Lions that are popular among fans.

Sean, an HGV driver, made a personal best of £65,000 in 2015 alone, and in recognition of his commitment to the British Legion he was recommended for the medal – given for civil or military service worthy of recognition by the Crown –  and received it at Penshurst Place, an historic stately home in Kent.

Sean said: “It went really well. When you do this charity work you don’t do it for awards you do it for the British soldiers.

“Without them we wouldn’t be here. It only takes two weeks a year to raise money for them and compared to what they go through it’s nothing.

“I would like to say thank you to the Millwall fans who bought poppies from me all these years. If it wasn’t for them I would not be able to hit these targets I keep getting.

“I’d also like to thank Millwall Football Club for letting me sell on the football ground. If it wasn’t for them I would not be able to raise as much.”