Originally planned to be 22 storeys high, new proposals would see the main tower at 26 storeys 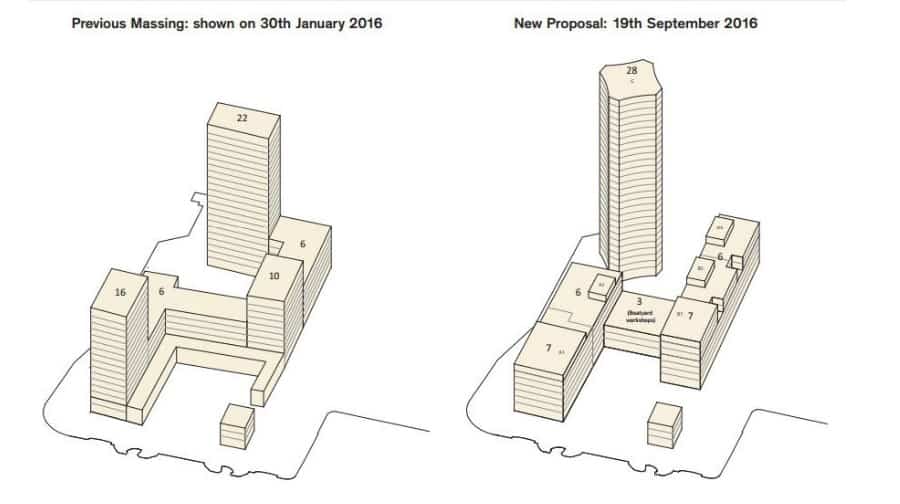 Before and after: how the plans compare

Updated plans for a tower next to Rotherhithe’s South Dock Marina boatyard has left a group of residents dismayed, after Southwark Council revealed proposals to make it six storeys taller.

Originally planned to be 22 storeys high, new proposals would see it at 26 storeys, despite a campaign earlier in the year for the council to reconsider how building flats next to the boatyard would affect it.

A model of what the new site would look like

Residents voiced fears that if such a large building was constructed, noise and disruption caused by the yard may lead to complaints aimed at having it shut down.

The tower would be delivered as part of a project to redevelop the area by the marina, with an updated target of delivering 193 homes – scaled down from the 214 previously planned.

The rate of affordable housing has also dropped from 51 per cent to 36 per cent, meaning 39 council homes will be built as opposed to 65.

“He says he has taken our views on board about the height and massing of the original design, yet has the gall to unveil a new proposal which features an even taller tower, and retains a huge unbroken bank of flats which cuts the river off from the community.

“He dresses this up as being about the delivery of social housing, and yet only 39 council homes will be delivered as part of the development. It’s clear they see the scheme as a cash cow and little more.”

Concerns were also raised over whether the current transport infrastructure would be able to cope with another development.

Nigel Staford-Clark, a resident, said: “They [Southwark Council] are not thinking about the infrastructure. They think about social housing which is laudable but when they get developers involved the amount of it will drop.

“The developer will always say they can’t afford it. It’s a crazy game they’re playing. They play with the people who live in Southwark who can’t get to school or get a GP appointment.

“They are going to put a boatyard in the middle of a development. It will only be a matter of time before it’s elbowed.”

At the unveiling of the plans on Monday night, Adam Khan Architects, did emphasise that much had been done to minimise noise disruption and previous blocking of views.

But Surrey Docks Liberal Democrat councillor, Dan Whitehead, criticised the project for making the tower taller, and having a “timetable as clear as mud”.

Councillor Mark Williams, Southwark Council’s Cabinet Member for Regeneration and New Homes, said: “In Southwark we are committed to tackling the housing crisis head-on and building homes of all types for local residents including new council homes and homes for key workers.

“We have amended our plans for South Dock Marina to reflect the comments residents have raised so far.

“This scheme will deliver nearly 200 new homes, a new park, and secure the long term future of the boatyard.

“On Monday night we presented our latest plans to local residents, and we will continue to discuss our proposals before submitting a planning application next year.”

For more information about the plans, visit tinyurl.com/sdockmarina