The crime rate remains high this year in Southwark, despite being in a national lockdown 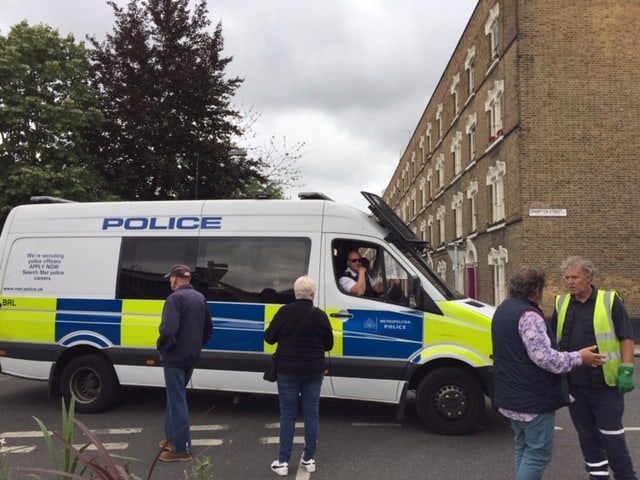 A police vehicle at an incident last year

More crimes were committed in Southwark than in almost any London borough in the first two months of the year, Met police figures show, writes Kit Heren…

Some 4,192 crimes were committed in Southwark in January and February – a rate of about thirteen offences per 1,000 people – putting the borough fourth out of 32 in London for the period.

“Violence against the person”, a wide range that includes murder, actual bodily harm and grievous bodily harm, as well as common assault and harassment, was the most common type of crime, with 1,159 offences. Some 327 of these caused injuries, although none were murders.

The next most common offence over the first two months of the year was theft, with 934 incidents. There were 498 incidents of vehicle offences, 374 drug crimes, 317 burglaries, 286 public order offences, 276 incidents of arson and criminal damage, 151 robberies, 99 sexual offences and 44 incidents of weapon possession.

There were a further 54 incidents of “miscellaneous crimes against society” – which includes offences like bigamy, soliciting for prostitution, perjury and bail offences.

But crime is down significantly in the borough compared to this time last year. The police recorded 6,014 offences in January and February 2020, a rate of about eighteen crimes per person across the two months.

Theft was the most common offence, with about 1,600 incidents, although violence against the person was still higher than in the first two months of this year, with more than 1,400 incidents.

The Met recorded nearly 104,000 crimes in the first two months of 2021 across the 32 London boroughs. There were no figures available for the City of London. The average across all boroughs was about 3,250 crimes – meaning Southwark was about 29% above average.

Croydon recorded the most crimes in January and February, with 4,781 offences – although its crime rate per person was slightly lower than Southwark at about twelve. An east London trio of Newham, Tower Hamlets and Hackney completed the top five.

The boroughs with the lowest number of crimes were all in the suburbs: Kingston upon Thames with 1,394 offences, Richmond upon Thames, Sutton, Merton and Bexley.

Southwark has always been up there in crime and the elected council never seem to have a coherent plan to address crime. They only want to keep building and build up more flats to increase their tax income stream. No parks. Increasing density will just increase aggression related crime.

I blame Southwark Council too lack of investment mismanagement of Council funds could of eased this years ago stopping this before it starts and years of same MPs with one goal now the London Plan never addressing really what the youngsters before they turn bad really need and want rather sweep this under the carpet admit their failings then just say it’s out of control pass the buck!

I asked this as well all these new builds and developments usually adjacent to a run down Southwark Council block of Social Housing flats where kids all they got is stairwells, wonder if they tell any potential buyers wanting to buy into this illusive dream they mostly like will be victims of crime because no one invested the new build profits just across the road. Sooner we have a Southwark Council reshuffle the better and accountability of funds for everyone affected as this will only get worse!