Southwark among worst boroughs in UK for fly-tipping

Southwark says it ranks so highly because it logs all fly-tipping, not just incidents reported by the public, but incidents have gone up 20% in the past year

Southwark is among the worst local authorities in the country for fly-tipping – out of more than 300 – according to new government data.

That’s up more than 20 per cent from the previous year, when there were 17,782 incidents over a twelve-month period. Fly-tipping incidents went up across London as a whole by about seven per cent over the same period, from just over 360,000 to about 384,000.

Southwark says it ranks so highly because it logs all fly-tipping, not just incidents reported by the public.

Despite the borough’s high level of fly-tipping, Southwark ranks 198th for enforcement action taken against people who dump rubbish illegally – down from 44th the year before. The council said it fined 341 people for fly-tipping between April and the end of November this year.

One woman who lives on Bermondsey’s Rouel Road estate, and who didn’t want to be named, said she was surprised Southwark wasn’t higher on the list. “I’ve lived here for five years and it’s been bad all this time,” she added.

She said that she wanted the council to do more to change people’s attitudes to fly-tipping.

“I blame the council because people are dumping in a place with no dumping signs. They’ve said they’re going to bring in mobile CCTV to watch who dumps [rubbish] but I haven’t seen any.

“They need the mobile [CCTV] units, they need to put posters up on our estate, in all the different languages so people don’t have an excuse.

“No one’s interested [in sorting out the fly-tipping problem] because no one does anything about it. People’s attitude is the point.”

Southwark introduced a £25 charge on collecting bulky waste items like fridges and wardrobes in 2015. The council has brought in about £1.2m in revenue from this service in the six years since.

Southwark’s bulky waste disposal charge is typical for London boroughs. An analysis by the News of all 33 local authorities in London showed that most councils charge between £20-£50 for getting rid of big items like fridges and sofas, with a few outliers on either side.

Richmond has the highest charge of £62 for up to five items, although the south-west London council also offers free collections for people on housing benefits. Kensington and Chelsea, Westminster and Hackney also all offer free collection for similar groups, while Islington gives a 50 per cent discount. 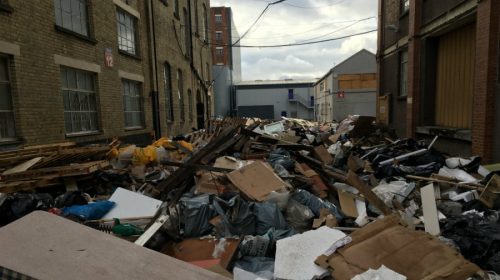 Southwark’s Liberal Democrats put forward a motion to get rid of the bulky waste disposal charge at the last full council meeting in December, but this was unsuccessful.

Following the meeting the borough’s Lib Dem leader called again for the council to drop the charges.

Residents are unhappy with the state of our streets and Labour is simply ignoring them.

“Even the Conservatives at City of Westminster Council provide concessions for bulky waste disposal. Southwark Labour must urgently get a grip and address this issue.”

Asked why she thought people were fly-tipping, the Rouel Road estate resident said: “Why pay £25 when you can pay nothing? I can’t see it getting better.”

Similar to the street cleaning issue we reported on last week, it’s clear that there are multiple causes for the fly-tipping problem in Southwark. 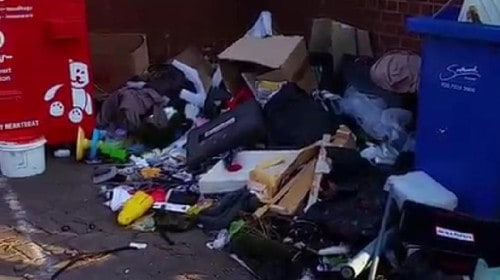 Councillor David Renard, environment spokesperson for the Local Government Association, said that companies that produce bulky goods should help councils bear the burden by taking back items that people no longer want.

He said: “Manufacturers should also contribute to the costs to councils of clear-up, by providing more take-back services, so people can hand in old furniture and mattresses when they buy new ones.”

Cllr Darren Merrill, Cabinet Member for a Safer, Cleaner Borough, said: “Our position in the performance table has been fairly consistent in relative terms for some years. However, our fly-tipping numbers reflect the fact that we log and report all fly-tipping. This includes instances reported to us and those identified and cleared by our staff. This helps us to better map a clear picture of problem areas, and address them. A number of other councils only record fly-tipping that is reported by the public. The two methods give different results.

“In Southwark we are committed to reducing fly-tipping and our officers work to identify and address the worst affected areas. We increase patrols in hotspot areas, install temporary CCTV and work to redesign spaces to discourage illegal fly-tipping. In addition to this, we take enforcement action against those who fly-tip. We issued 341 fines to residents and businesses for fly-tipping between 1 April and 30 November, this year. We also help local residents to understand how to dispose of their waste responsibly and ensure that businesses have the correct waste collection agreements in place.”

Most companies will get rid of your old fridge etc for a small charge . People need to factor this in when buying or give it away via Next Door …there is always someone who will take it . Where I live in Southwark its really bad but they wont put up cameras. Fly Tipping is the biggest crime in the UK after drugs and a lot are builders doing up houses .

Southwark NewsNewsSouthwark among worst boroughs in UK for fly-tipping