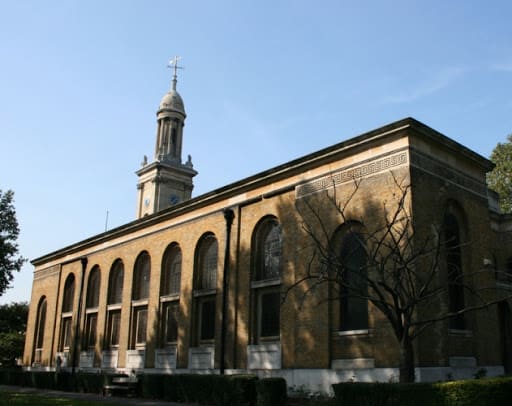 The Bishop of Southwark took to his knee for 8 minutes and 46 seconds during a Walworth service today, in solidarity with the Black Lives Matters movement.

The gesture has become a symbol of solidarity among protesters following the killing of George Floyd in Minneapolis two weeks ago.

George Floyd’s killing at the hands of law enforcement has sparked protests across the world, including in Peckham.

The Right Revd Christopher Chessun was invited to the outdoor service in St Peter’s Church by rector Andrew Moughtin-Mumby to commemorate George Floyd’s memory – who also called for the Church of England to tackle its own ‘racist structures.’

Children and staff in the playground of St Peter’s Primary School next door also took to their knees at the same time, according to the church.

The church called the gesture an act of lament, solidarity and “of quiet protest” against the “racist structures of the Church of England and of our Government as revealed in the Windrush scandal.”

“It will be a symbolic act which we know must be followed with our own action to work for a Church and nation with more equal structures, and to work against racism and discrimination of any kind wherever we find it,” it said. St Peter’s added that it had its own history of racism, which it had tried to confront, with its rector Father Andrew having previously called on the Church of England to face its own failings in welcoming the Windrush generation in the 1940s and 50s.

A parishioner at the church, Doreen Browne, has spoken about her experiences of racism within the Church of England, after her family were barred from entering St Peter’s in 1961 “due to the plain fact of the colour of her skin.”

A motion submitted by Father Moughtin-Mumby earlier this year to the Synod – the Church of England’s ruling body – had called on the institution to reflect on its own failings in tackling racism.

In response, the Archbishop of Canterbury, Justin Welby, admitted that the CoE remained “deeply institutionally racist.”

He added: “There is no doubt when we look at our own church that we are still deeply institutionally racist.

“Let’s just be clear about that. I said it to the College of Bishops a couple of years ago and it’s true.”

You can view the live-streamed service on Facebook here.