Kids at Brunswick Park Primary raised the most, giving £145 to charity by selling their own veg 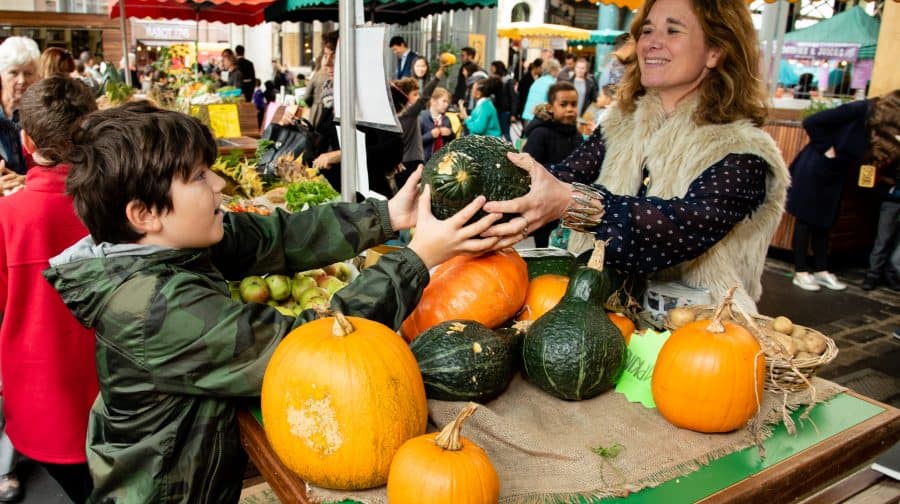 Southwark schoolchildren raised over £500 to go towards feeding vulnerable families at a Harvest event in Borough Market yesterday.

Over 50 primary schoolkids from Southwark, Greenwich and Newham raised £532 for the charity FareShare by selling their home-grown fruit and veg.

Green-fingered children at Brunswick Park Primary, one of the ten Southwark schools taking part, raised the most, giving £145 to the charity by selling pumpkins, squash, carrots and apples. Darren Henaghan, Managing Director at Borough Market said: “Growing their own fruit and vegetables connects children to the food they see on their plate, and helps them make healthier choices.

“We’ve been working with local schools for seven years now, training up the next generation of market traders and encouraging young people to experience the joy of sowing, harvesting and selling – and of course ultimately enjoying eating the fresh fruit and veg that they’ve grown themselves.”

Research conducted as part of the annual Harvest Sale, which has helped provide over 17,000 meals for disadvantaged families, found that kids really do know their apples from their oranges.

The survey conducted on behalf of Borough Market found that over 90% of kids aged 7-11 could correctly identify common fruit and veg.

Even less common items like rhubarb and asparagus were correctly spotted by three-quarters of the children surveyed.

The stereotype that kids don’t like their veg might not be true: 87% of London schoolkids have grown their own at some point.

Mr Henaghan added: “It’s encouraging to see that children are more knowledgeable about where produce comes from than in the past.

Growing their own fruit and vegetables connects children to the food they see on their plate, and helps them make healthier choices.”