The bells were blessed during a special evesong service 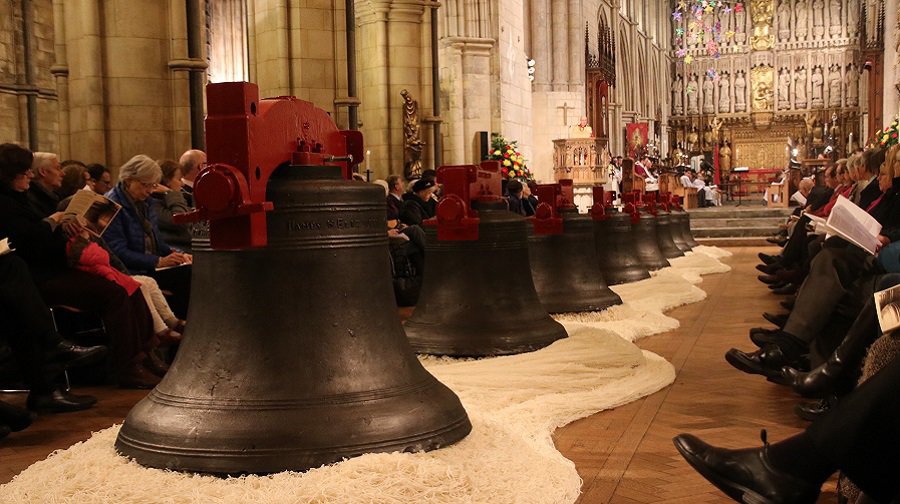 Credit: Southwark Diocesan Communications. A set of bells at Southwark Cathedral were blessed by the borough's bishop, ready to be restored to their rightful places.

A pair of bells have been blessed during a special service, ready to be restored to their rightful place at Southwark Cathedral.

The Bishop of Southwark, the Rt Revd Christopher Chessun, dedicated, baptised and blessed two newly re-cast bells during an evensong service at the cathedral on Monday, January 9.

Following a practice which has taken place in this country since mediaeval times, the two re-cast bells were baptised, named and anointed and will be raised into the tower and restored to their places in the next few days.

The Bishop also re-dedicated ten other bells, including the seventh bell which was dedicated in memory of Colin Slee OBE, former Dean of Southwark, and given the name Nicholas, of which Colin is a diminutive.

The tenor bell was also dedicated in memory of James I of Scotland and his descendants, as well as those who died in World War I and given the name Andrew for St Andrew, Patron Saint of Scotland.

The Dean of Southwark, The Very Revd Andrew Nunn, said: “This is a wonderful day for the Cathedral and sees the end of more than a year’s work from when this ‘once in a generation’ project was started.

“We are grateful to all the donors, whether large or small, private or corporate, named or anonymous, that have made this work possible.”