It's now been referred to the Information Commissioner's Office for investigation 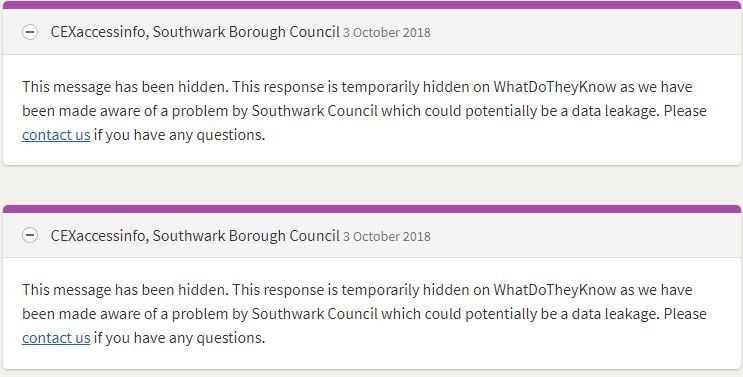 Southwark Council has apologised for a “very unfortunate” data leak which revealed the personal details, including full addresses, of twenty people.

The council made the blunder answering a Freedom of Information request on the public WhatDoTheyKnow website on October 3rd, which asked for correspondence between council officials and the developer Delancey.

A day after answering the request council officials realised they had accidentally leaked personal details which should not have been made public – and asked those who had downloaded the response to delete their copies.

In a message to the enquirer, a council official said: “It has been brought to our attention that your response may have contained some data which should not have been released.

“Whilst we investigate, please can you delete all the copies of the response that you may hold.”

However, responses on the website are available to download and may have been saved by others before it was deleted.

The council said it has since referred the leak to the Information Commissioner’s Office (ICO), which investigates data breaches.

Under the law, data controllers must report certain types of breaches to the ICO within 72 hours. Contacted by the News, Councillor Johnson Situ, cabinet member for growth, development and planning, said: “This was a very unfortunate error where the personal information, such as contact addresses, of around 20 people was not fully redacted in our EIR response.

“We immediately withdrew the response when we realised the potential issue but unfortunately it had already been published in the public domain on the WhatDoTheyKnow website.

“We asked for this to be removed, and it was. We have already self-reported this event to the Information Commissioner’s Office and we will review our processes to ensure they are robust.

“I apologise to those whose details were shared with WhatDoTheyKnow unnecessarily.”

The Information Commissioner’s Office told the News: “We are aware of an incident involving Southwark Council and we will be making enquiries.”