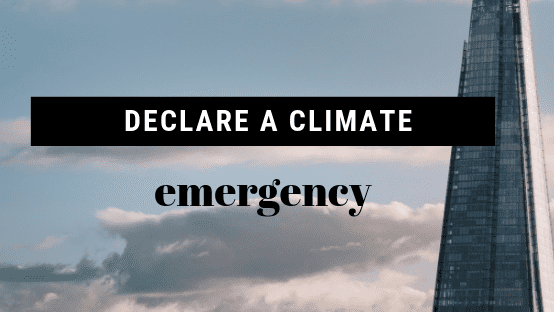 A climate emergency has been declared by Southwark Council after a coalition of environmental campaigners successfully petitioned the local authority to go carbon neutral by 2030 – two decades earlier than planned.

The move was unanimously passed by councillors on Wednesday evening after a campaign led by Southwark Green Party, who petitioned for action after the UN’s Intergovernmental Panel on Climate Change (IPCC) announced there are just eleven years left to avoid the catastrophic global consequences of exceeding a 1.5 degree Celsius increase in global temperature above pre-industrial levels.

Now all eyes will be on how the targets will be achieved by environment cabinet member councillor Richard Livingstone and council officers.

After the decision, Green Party chair Louise Young told the News: “We are pleased that the council declared a climate emergency and brought their carbon neutral target forward by 20 years.

“With such a significant change in the target, myself and other local activists really want to assist the council so that we’re all working towards one clear target together – which is why I suggested that we can develop a stakeholder forum together which is open to the public to assess council progress.

“I was encouraged to hear Cllr Livingstone say he wanted to meet with us to devise how to engage local community groups in the strategy development.”

The campaign achieved wide cross-party support from Labour and the Liberal Democrat opposition, and was supported by environmental campaigners including Plan B, who are taking the government to court in an attempt to stop the Heathrow expansion, Fossil Free Southwark who campaign for divestment from fossil fuels, air pollution campaigners Mums for Lungs, and students who had gone on climate strike.

Many had gathered outside Tooley Street waving banners and placards.

And it's official. #climateemergency motion (@swklibdems amendment) passed unanimously. @lb_southwark have declared climate emergency. Now they must be radical and ambitious to meet their target to be carbon neutral by 2030. We'll be ready to help and to push, push, push!

Among those lobbying the council was Peter Baffoe, who told the local politicians how disadvantaged people disproportionately bear the brunt of environmental problems: “It is important to acknowledge that a report commissioned by the mayor of London in 2016 found that London’s black communities were disproportionately exposed to air pollution,” he said.

“This coupled with the previous research that has shown the clear link between economically deprived areas and greater exposure to pollution should encourage a borough like Southwark to be at the forefront of any changes that cut emissions improve our environment.”

David Allan, from Mums for Lungs, said the group was delighted by the result: “We see this as an encouraging sign that our leaders are waking up to the scale of the climate crisis and are ready to take meaningful actions.

“If this is followed up with concrete steps and time-specific targets we think it can go a long way towards improving the dirty air that our children are forced to breathe in London; we hope to see a prioritisation of public transport, cycling and walking and a move away from the dominance of the car.”

Southwark residents before the declaration of a climate emergency by @lb_southwark, @SouthwarkXR

Fourteen-year-old activist Caoimhe said residents need more information and support to lower their carbon footprint: “Children and families would benefit hugely from education and information provision on tackling climate change in school so we know how to make a difference while the Council does the big things like building cycle lanes and keeping toxic cars away from schools and homes,” she explained.

By declaring a climate emergency, Southwark has joined councils like Lambeth, Hackney and Bristol, all committing to speed up their efforts.

Karrim Jalali, member of local campaign group Fossil Free Southwark, applauded the council’s decision. “This is a great first step. The council now needs to make sure they consider and weight the environmental impact of every decision they make. We will be monitoring closely.”