The family "intentionally" made themselves homeless by falling into rent arrears with their old landlord, so the council say they don't deserve a council flat either 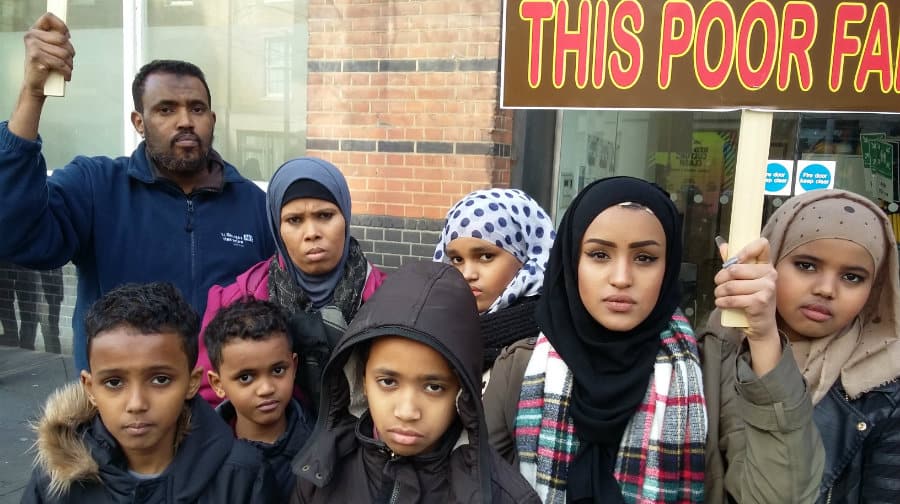 An imam and his family of nine have been evicted from their flat after Southwark Council decided they were not entitled to live there.

Faysal Abdirahman, 46, who is the imam of the Camberwell Islamic Centre, had lived in the three-bedroom flat in Benhill Road, Camberwell,  with his wife and seven children since June 2014.

The family were given the house to stay in after they were left homeless from being in rent arrears with a private landlord.

Faysal’s wife Fardowsa Jama, 39, opened the door on February 11 to find bailiffs and police ordering them to leave.

“It was very scary,” Fardowsa said. “They banged on our door and windows. I felt very shocked and scared and it frightened the children.”

The couple claim they had no warning before the bailiffs arrived and did not even have time to pack up their belongings. But Southwark Council say they sent warning letters before the eviction.

The council say they were entitled to kick the family out because they “intentionally” made themselves homeless when they lost their first flat in June 2014.

Protesters condemn the council for evicting family of nine

“Telling anybody to leave our temporary accommodation, especially those with children, is always a difficult decision for the council and is always the absolute last resort,” Cllr Richard Livingstone, cabinet member for housing.

“However, the fact remains that in this case the family had built up rent arrears with their previous landlord and as a result we are legally required to consider them intentionally homeless and so are not under any obligation to provide them with housing.

“The family appealed the decision but it was upheld after review and sadly they have now exhausted all the legal options open to them.”

Last Friday the family were joined by friends and members of the United Voice and Partners campaign group to protest outside the council’s offices in Tooley Street, and deliver a petition to leader of the council, Peter John.

Faysal, who came to London to escape the Somalian Civil War, said: “This has put a terrible strain on my family and we have been forced to live apart from each other with friends across London.

“My fifteen-year-old daughter is doing her GCSEs and this has been very stressful for her, and for my five-year-old son who is autistic.

“We were in arrears with our old landlord for two months. This is extremely unfair on my family”

Councillor Richard Livingstone added: “We have offered them support and advice to explain the alternative options open to them, and will continue to do so.

“There is additional support open to them through our children’s services team, who have also spoken to them to advise how they can help them to get into private accommodation.

“With so much demand for our council homes I think the thousands of families on our housing waiting list would find it difficult to understand why we gave preference over them to someone who hadn’t paid their bills.”