Family of four are stuck in studio flat 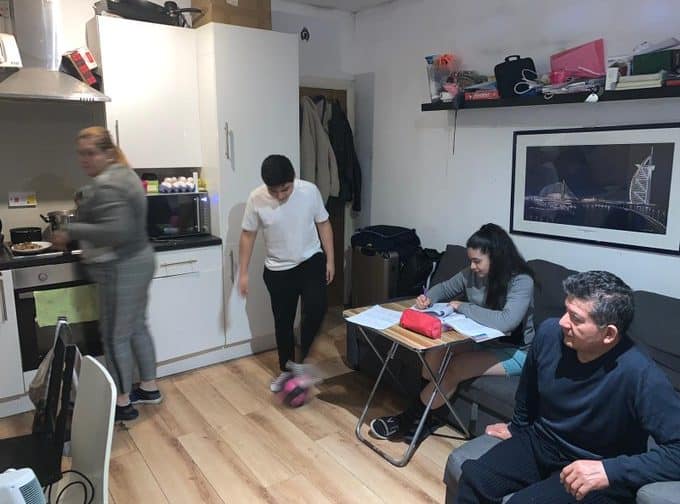 Milton and his family in their studio flat home

A family of four stuck in a severely overcrowded flat in Walworth are threatening Southwark Council with legal action – after they were told their housing crisis was a ‘deliberate act’.

Advocacy group Housing Action Southwark and Lambeth have taken on the case of Milton, his wife and two children aged eighteen and fourteen, with support from Southwark Law Centre.

Last December, another HASL family were successful at overturning Southwark council’s decision that their severe overcrowding was a ‘deliberate act’ in the Court of Appeal.

But, despite this precedent, they have so far have been unable to move Milton’s family further than band 3 in nearly four years of living in the cramped home.

Milton first moved to the UK in search of work in 2016, temporarily living in Lambeth, before his family joined him soon after. Since then they have lived in a studio flat in Southwark and have struggled to find suitable accommodation.

In July 2021, the local authority wrote to the family outlining its decision on their plea for priority housing. An official from the council’s Housing Solutions Department explained: “I consider it is expected and not unreasonable to suggest that before arranging for your family to join you in the UK and paying for their airfares you would have first made some enquiries into where you all may legitimately and safely live together.”

The letter goes on to say that “although your employment may be in Southwark and the children schools may even be in Southwark, there is no special requirement for you to reside in the borough”, describing his “resourcefulness” in having lived in both Spain and Ecuador previously in search of work opportunities and implying he could use these skills to find a home elsewhere. The letter concludes “it is our position that it is the choices you made that led to you occupying accommodation that was statutory overcrowded at the outset”.

Milton, for whom English is a second language, said any offers of housing made were all far from their work and schools and too expensive, being in the private rented sector.

“It has been a very hard time, not only for me, but for my children since they were the ones who will translate for me and help me with the documents to be able to present to the council,” he explained.

“My children have spent their free time after school to help us with the council procedures. This is unfair since they ask us the same information again and again.

“I had to move to this flat, for many reasons, for example the agencies asked us for many months rent in advance, I also couldn’t rent a three-bedroom house because it was too expensive, and they also asked me to have a full-time job.

“We had no other option to rent the studio flat due to our financial situation. Our situation living in the flat is not the best, this situation that I and my family are going through is very hard.

“For example, my children cannot study in this environment since the space is limited, our flat does not contain any room, and everything is included with the kitchen.”

His daughter Rebecca added: “Sometimes it feels really embarrassing for us to apply for housing.

“We are immigrants so applying for housing makes us feel embarrassed, every time they say no to us, you cannot apply for housing.

“But we feel like Southwark is our home. I have my friends here, my church, I go to the gym to relax and get away from the flat. I do volunteering which makes me feel good.

“It feels like we’re treated like we have done a crime because of the way they have treated our case.”

Elizabeth Wyatt, from HASL said: “Even after the Court of Appeal case and years of campaigning and engagement by families in overcrowded housing with the council, it feels like nothing has changed.

“This decision is absolutely devastating for the family who have already suffered years in unimaginable housing conditions.

“As well as denying them the urgent move into the permanent, more spacious council housing they need, this decision is also cruel and offensive.

“We have repeatedly highlighted to Southwark council our concerns about the use of ‘deliberate act’ which is targeted at low-income families of colour and migrant families.  And yet time and time again we have been ignored by the council and councillors.

“In Milton’s case, he has been asked by the council if there is a specific reason his family need to live in Southwark.

“Does Southwark council ask this question to all families, or just migrant families? We do not know how the council can justify such a cruel and hateful policy.”

Councillor Stephanie Cryan, cabinet member for council homes and homelessness told the News: “While this is still being dealt with as a legal issue we cannot go into too much detail about the family’s individual circumstances – we would prefer to communicate with them directly.

“However, I can confirm that we have offered lots of support to them, that we did not infer or say that they should have stayed in Ecuador – we assessed their housing situation in relation to their move from Ecuador, and also from Lambeth.

“We also offered them suitable housing in the private sector and asked if they wished to make a homeless application, which may include temporary accommodation.

“These offers were declined. We are still here to offer the family any support they require and I sincerely hope their housing situation is soon resolved.”

The council is correct in this case. If you read the housing allocation policy it is very clear and you wouldn’t print this silly story. I’ve lived in Southwark all my life, I work, have two kids and I’m homeless because my landlord sold up. I’ve been in temporary accodamtion for 4 years and we’re still band 3 and I’m no closer to housing. People like this try to work the system. They moved into a studio flat knowing they’re 4 people thinking this will give then band 1 status for housing. However you’re only legally overcrowd if it’s not a deliberate act. This is why it’s so hard to get council because the council has to always be on the look out for people trying the play the system. How do you move to another country and not think about where you’re going to live?