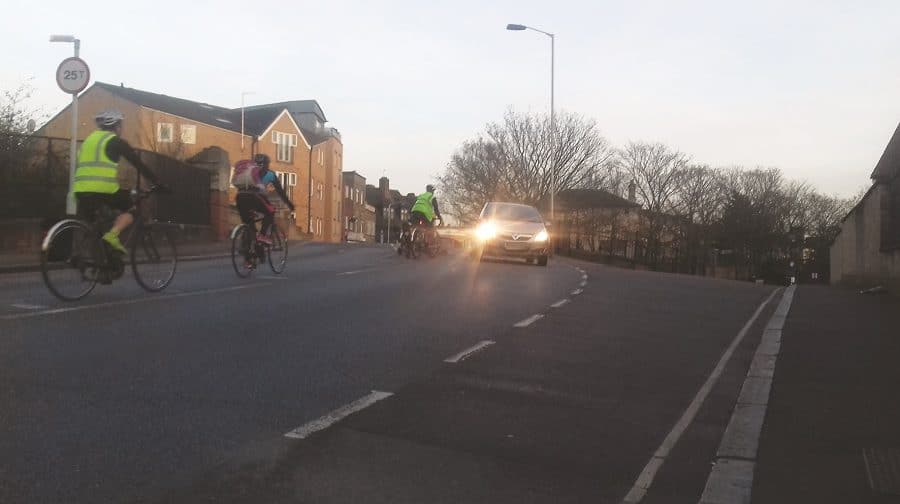 Southwark Cyclists have accused the council of “knowingly putting cyclists’ lives at risk” by not signposting a safe cycle route while the Surrey Canal Path is closed.

With the path part closed until late March, the “vast majority” of cyclists on this route are now joining the traffic on the bridge on Willowbrook Road in Peckham.

However, doing this means that cyclists have to turn across oncoming traffic and do it partially blind as they can’t see what vehicles are coming over the hump of the bridge.

With safe alternatives via nearby Colegrove Road, Glengall Road and Sumner Road available, SC have lobbied the council to signpost the way – but say they have been met with refusal.

In response to concerns raised, the council put up a “slow down cyclists merging ahead” sign at the roadside but for SC, this doesn’t go far enough.

They are particularly concerned about “novice” and “inexperienced” cyclists who may suddenly find themselves in the face of heavy oncoming traffic, including buses and HGV lorries.

“The more shocked you are the less confident you are. This is thrusting new, inexperienced cyclists onto a dangerous route,” said Sally.

Ex-cycling instructor and Peckham resident Billy Clerkin said that the route is “dangerous” for inexperienced cyclists.

Billy Clerkin, ex-cycling instructor and SC member, agrees. “This is definitely a dangerous route for inexperienced cyclists. You have to turn across oncoming traffic, partially blind and going up a hill.”

According to SC counts, the Surrey Canal Path via Willowbrook Road carries 750 cyclists an hour during the morning rush hour.

Andy Cadwell, Chair of Southwark Cyclists, said: “It is irresponsible to knowingly allow cyclists to put themselves at risk in this way when there are easy and safe alternatives”.

Councillor Ian Wingfield, Southwark Council’s cabinet member for environment and public realm, said: “We are aware of the concerns raised by Southwark Cyclists although the temporary route was already in use by cyclists prior to the closure. We’ve taken on-board their concerns and installed additional signage on Willowbrook Road to alert drivers to cyclists joining the carriageway on the signed diversion route.”

“As such, the temporary diversion route should not create any additional hazards for cyclists. Unfortunately, the route suggested by Southwark Cyclists has been reviewed but cannot be adopted without a formal safety audit. The temporary route will be lifted by the end of the month once the Burgess Park works are near completion.”