Bottom of page: cabinet member reacts to accusations of 'religious discrimination' from Save Southwark Woods campaigners 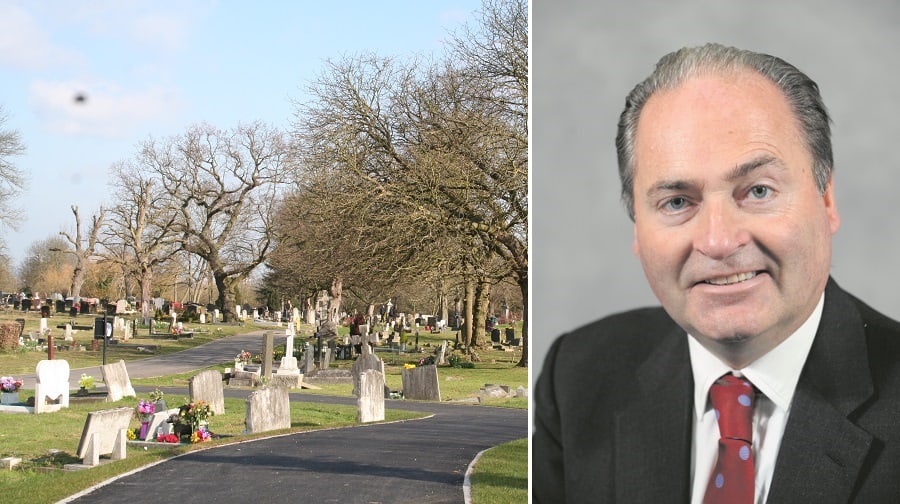 Southwark Council has been given permission to march ahead with its strategy to re-landscape Camberwell Old and New Cemeteries and create hundreds of burial plots.

The council applied eighteen months ago to the Diocese of Southwark, whose official response came on March 1, despite a long-fought campaign by Save Southwark Woods (SSW).

The affected area of Camberwell Old Cemetery (Area Z) is a two-acre site in its north-west corner, beside Underhill Road. It is roughly 66 per cent consecrated ground, while the rest has been cleared of scrubland after it was contaminated in an illegal dumping incident in 2003.

The council plans to create 700 new burial plots in Area Z. The site would also see a net gain of 50 trees once scrub and saplings have been cleared, and the creation of “habitat features for amphibians, reptiles, mammals and insects”.

Camberwell New Cemetery (Area D1) will get 145 burial plots on a site of 24 young trees that will be felled. But “at least” 25 trees would be planted in their place.

Councillor Ian Wingfield, Southwark Council’s cabinet member for environment and public realm, said: “We are delighted that the Diocese has approved our plans to create more burial spaces in Southwark.

“Local people will now continue to have the choice to be buried locally, rather than being forced to pay higher costs for burials outside of the borough.”

The Diocese’ written response, penned by Diocesan Chancellor Philip Petchey, addressed criticisms levelled at the council by SSW relating to fears of flooding and loss of habitat.

Mr Petchey said: “No expert evidence has been supplied to me by any of those who are objecting.

“For my part, I have not identified any sufficient reason for objecting the judgements of the [Southwark Council] planning authority.”

He added: “I hope that with greater knowledge of what is proposed and the background to it, some of those who have objected may change their minds. I expect that some will still disagree, as they are entitled to do. Nonetheless I hope that these objectors will recognise the considerable care that has gone into the design of the two schemes before, both from the landscape point of view and more generally.

“The proposals will help to ensure that in the future those living in Southwark who wish to be buried in consecrated ground will continue to be able to do so.

“I am confident that despite the controversy, these proposals will be seen in time to have been both sensible and well-thought-out and to have improved both cemeteries.”

The SSW campaign was formed in 2015 reaction to Southwark Council’s planning application to the cemeteries being submitted. Their online petition – which sought to have the cemeteries given protection as a nature reserve – received 12,000 signatures from locals and people from outside the borough.

Over 800 people wrote to the Diocese objecting to council’s proposals, described by SSW as plans to “fell acres of woods and mound over thousands of people’s graves to sell as ‘new’ burial plots over the dead”.

In October last year, Southwark Council published findings of a survey used gauge public opinion towards its plans for another area of its cemeteries strategy, in Honor Oak Park. The survey findings showed that 82 per cent of 445 respondents (296 of whom were Southwark residents) said they disliked “all elements” of the Honor Oak Park proposals.

A senior councillor has told the News that campaigners have “thrown the kitchen sink” at Southwark by claiming its cemeteries strategy discriminates against Muslim residents.

Cllr Ian Wingfield, Southwark Council’s cabinet member for environment and the public realm, said the council stood by its consultations taken in 2012, which he said “showed that the majority of the public wanted the continued provision of burial space for local people”.

He addressed repeated allegations by SSW that Southwark’s strategy discriminated against Muslims who could not be buried over other people’s graves.

The council argues that Nunhead Cemetery currently contained enough space to last until 2025 (based current levels of demands).

Cllr Wingfield said: “It’s a working brief. If the demand for Muslim burials increases we would have to make that provision for them.

“The Muslim faith is as varied as the Christian faith. It could be that there is provision for them elsewhere in London. It’s not for us to second guess their needs. We will respond as it represents itself.

“SSW can’t bring forward an example. If they were able to evidence their critique I would take it forward. They are throwing the kitchen sink in to get the decision they want without it being based on evidence.”

He also accused SSW of exaggerating the number of trees that would need to be felled.

“If you looked at their literature you would think we had chopped down Sherwood Forest,” he said.

He argues that the creation of new burial plots is “essential” to meet a forecasted increase in demand with the borough’s population expected to hit 4,000 people by 2040.

“We have to take that longer-term view,” Cllr Wingfield said. “We’ve not been hard and fast over this. It hasn’t been a talking shop or window dressing. We’ve listened very genuinely to concerns expressed, and we have amended the existing plans. We’ve not done what everyone wanted to do, but it’s a compromise.”

The News asked Cllr Wingfield if the council had a motive to refurbish the cemeteries as a way to make money from also providing burial space for residents from outside of the borough.

The council currently charges £630 for non-residents, compared to £210 for residents.

Cllr Wingfield did not deny this as a possible revenue source, but said the council’s interment charges “are in line with other councils’” and “are not exorbitant prices”.

He added: “If someone has lived their whole life here, it must be the case that we put Southwark residents first. Most people want to be buried in their community… I imagine people from other boroughs would say the same. People want to stay local”.

Members of Save Southwark Woods deliver their objections to the Southwark Diocese. Lewis Schaffer (centre left).

Save Southwark Woods (SSW) campaigner Lewis Schaffer has told the News he believes the burials strategy “will never go ahead” due to its indirect discrimination towards people of Muslim faith.

“Southwark Council has not asked the people of Southwark what their burial needs are. They are not providing enough burial space for people of Muslim faith who have to be buried, and who cannot be buried over existing burial ground.

“We are not saying that we are speaking on behalf of Muslims, we are just pointing out that Southwark is being indirectly discriminatory, which is illegal.”

SSW pointed to data received from Freedom of Information requests to the council, which showed that 48 Muslims have been buried in Southwark in the last seven years, out of total of 2,995 burial, equalling 1.6 per cent.