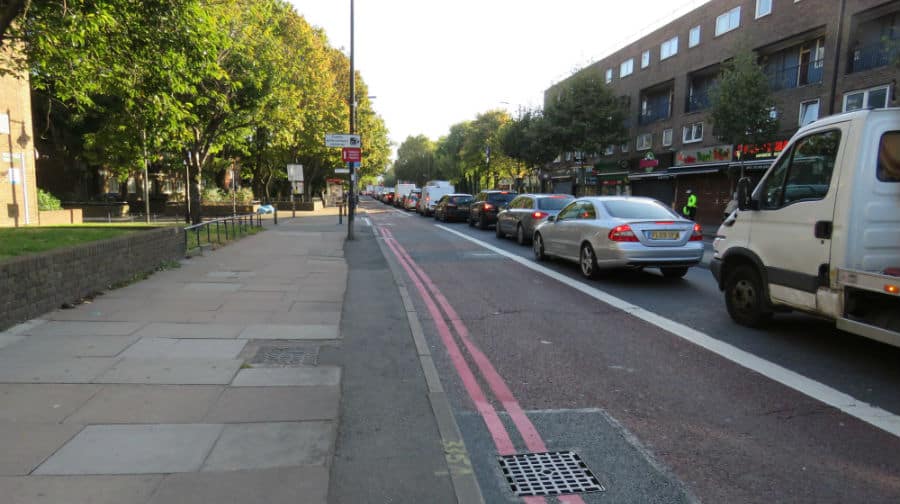 Southwark had the third highest rise in bus lane fines in London over the course of a year, figures have revealed.

Penalty charge notices issued by the borough’s council saw a 156 per cent increase between 2015-16 and 2016-17, according to research by motoring specialists Click4Reg.co.uk.

It followed Merton which had the biggest percentage increase at 172 per cent, and Havering with 163 per cent.

Lambeth council was found to have dished out the highest number of bus lane fines in London between April 2016 and March 2017 at a total of 44,148 – the equivalent of 121 penalties every day.

Whereas Southwark only ranked 21st out of 26 boroughs with 4,328 fines.

At the other end of the scale, Wandsworth council issued the lowest number of bus lane penalty charge notices in London at just 61.

All bus lanes across London have blue signs indicating their times of operation.

Within these specified days and hours, unauthorised vehicles are forbidden from using bus lanes and if they do so they face the risk of a penalty charge notice.

Elie Fakhoury, managing director of Click4Reg.co.uk, said: “The sheer amount of bus lane penalty charge notices issued in London are certainly more than anyone would expect.

“With driving in the capital already problematic, largely due to the heavy congestion, it seems many drivers are using the bus lane to jump queues and minimise delays to their own trips.

“While many knowingly do so, there are those who are not aware of the infringements they are committing until being fined.

“For such individuals, they should thoroughly educate themselves on bus lane rules, markings and signage.”

Bexley, City of London, Greenwich, Kensington & Chelsea, Redbridge and Sutton & Westminster were all excluded from the research as none of them enforce bus lanes in their particular borough. Bus lanes run by Transport for London were also not included.

Helpful tips for drivers on how best to deal with bus lanes:

Don’t assume – If you’re driving and see a vehicle or few vehicles go into a bus lane, don’t automatically do the same thing. They themselves may not be aware of the correct outside of operation hours, where all vehicle types are allowed to use the bus lane.

Plan ahead – With the internet enabling drivers to easily check routes to desired destinations in significant detail, seek out bus lanes and check their hours of operation. Doing so, will eradicate any confusion you may have about the usability of different bus lanes on your journey.

Recognise markings – In the case you have trouble identifying bus lanes, remember dashed white lines or a solid white line clearly show the beginning and end of bus lanes. Moreover, the inside of a lot of bus lanes are painted a light burgundy to differentiate them from normal grey roads.

Understand signage – All bus lanes are recognisable through blue signs. These blue signs contain the days and times in which the bus lane is in operation and during these defined points, which kind of vehicles can legally be driven on them. So to avoid any misinterpretations, make the effort to fully learn and understand what the numbers, words and logos mean on the blue signs.