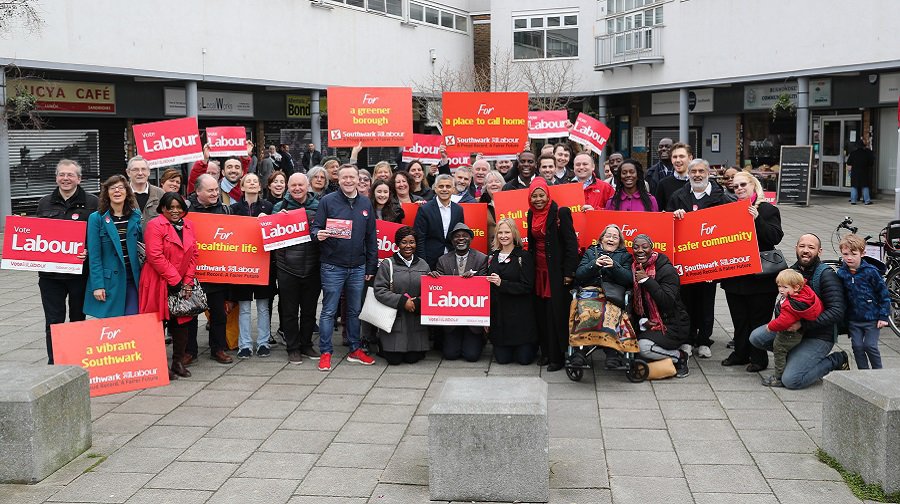 The Mayor of London visited Bermondsey to launch Southwark Labour group’s manifesto ahead of the local elections on May 3.

Sadiq Khan met with traders, politicians and residents at the Blue market place on Saturday to officially launch the campaign.

Speaking to the News, Southwark Labour group leader Peter John said what really excited him was seeing full employment in the borough in the next four years, and creating a Southwark Construction Company to build much-needed council homes and give people in the borough skills and qualifications.

“I really like the idea of the construction company and really getting some of those professional qualifications in-house and making sure it’s local and under-represented groups that are getting those opportunities,” he said.

“Full employment is something I’m really, really keen on and I’d like to see us deliver in the next four years,” he added. “The turnaround I’ve seen in employment numbers in Southwark in the last eight years is 10 per cent more people in work – that’s 45,000 jobs – and that’s Southwark residents which is really good news as it’s 76 per cent of the population.”

When asked why the local authority missed its own target of building 1,500 council homes by 2018 and what would be done differently to avoid this happening again if his party were re-elected, the Southwark Labour group leader admitted it had been a more difficult process than expected.

“Obviously we would not have said we could build 1,500 by 2018 if we didn’t think we would get there but it’s been a slower and harder process than we had imagined back in 2014,” he said.

“Part of that is that it takes much longer to talk to residents about new builds; they want to be involved in the design and who’s going to be living there quite rightly.

“And there has been some resistance so some schemes that we thought would be delivered we’ve had to remove from the programme so it has taken longer.

“We are up and running now and I’m as confident as I can be that we can deliver.” Mr John said that this year’s Labour manifesto was “evolutionary rather than revolutionary” in comparison to the last two elections which focused on free school meals in 2010 and free swim and gym for residents in 2014.

Southwark Labour also proposes to make sure 50 per cent of all housing built on council land will be let at council rents, and that EU citizens are made to feel safe and welcome in the borough throughout Brexit and in the future.

It has also opened talks with Meadow Residential LLP, the current owner of Dulwich Hamlet FC’s Champion Hill site, and will be making an offer in writing to them for the site to build council housing and secure the future of the club.

Mr John added that he could “make no guarantees” and didn’t “control the decision making” regarding a tube station at Bricklayers Arms as part of the Bakerloo line extension, but that Southwark Labour would carry on making the case for the station if re-elected.

– Quality of homes that you and your family need

– Fighting for you, on your side in challenging and uncertain times

– Great place to live with clean, green and safe communities

– Healthy borough where your background doesn’t determine your life chances

– Full employment, where everyone has the skills to play a full part in our economy

– A modern efficient council: working with the community, listening to residents and open to you