Three sets of five-day strikes are set to take place in October, November and December against government's imposed changes to contracts 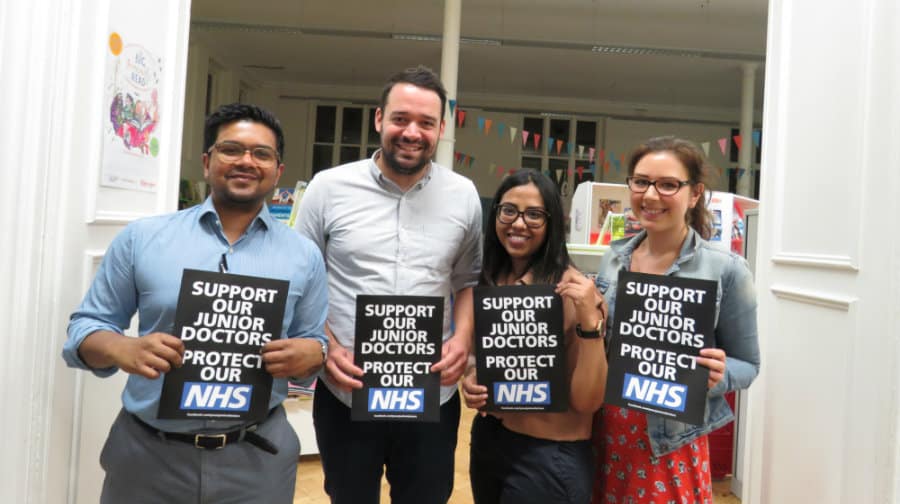 Junior doctors from hospitals in Southwark gathered for a community meeting with members of the public to rally support for forthcoming strikes.

It also followed the creation of a Southwark and Lambeth British Medical Association division last month – the body of junior docs which balloted over 95 per cent in favour of strike action earlier in the year, but recently cancelled five-day strike in September.

Chris James, a junior doctor at King’s College Hospital, told the meeting: “The truth is there’s not enough doctors. Going to a seven-service and making us work longer hours without hiring more staff will be unsafe.

“You trust us to treat you, and you trust us to look after you. We’re doing this for the right reasons. Harm will come to patients for years in the long run if these contracts happen.

“We already work seven days a week, and there will also be problems with not having enough nurses and consultants to work extra hours. You can’t just bring in junior doctors alone.

“If the government want an improved service they are going to have to fund it.”

“The NHS is ours. The power is with us, the ones who go to work. We have the power to stop the government doing this.

“There’s lots of pressure, there has been threats made against us to kick us out of the profession if we strike. But I say: bring it. They can’t punish all of us if we fight the contracts together.”

Ash Jameel, an eye doctor at St Thomas’ Hospital added: “Junior doctors are leaving medicine in their droves because it has become so difficult.

“We are also seeing increased privatisation of services due to the previous government’s Health and Social Care reforms. I can think of three occasions where private companies have got in the way or made inappropriate decisions, which almost became very serious.”

The next set of strikes on October 5-7, and on 10-11 with weekend cover signify a ramping up of the British Medical Association’s attempts to force secretary of state for health, Jeremy Hunt, to resume negotiations on the seven-day proposal.

They will be followed by further strikes between November 14-18, and December 5-9.

When junior doctors balloted to strike for 48 hours in April this year, Guy’s and St Thomas’ Hospitals NHS Foundation Trust confirmed 400 outpatient appointments and 28 non-urgent operations had to be rescheduled, equalling ten per cent of the total in their books.