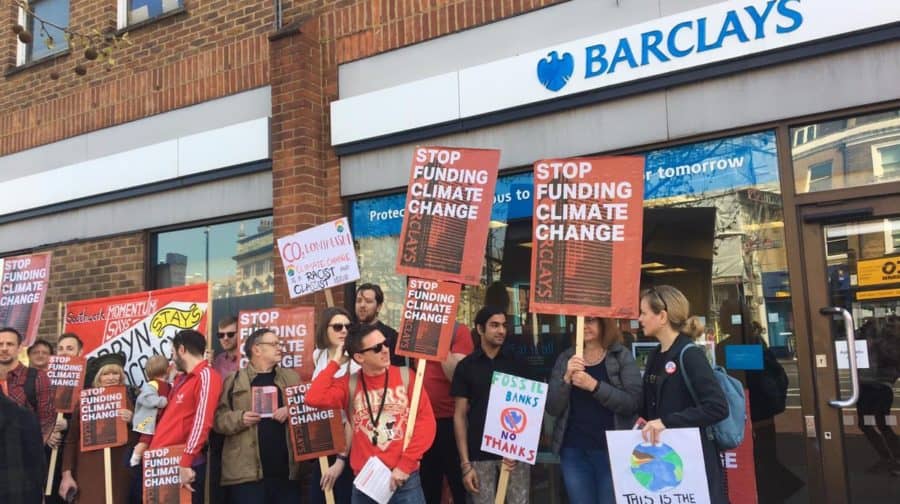 Momentum campaigners from Southwark gathered outside Camberwell’s Barclays bank branch on Saturday to protest against the bank’s fossil fuel investments.

The protest was mirrored across the country, with climate change campaigners taking direct action after a new report, published last week, showed Barclay’s has channelled the most investment into fossil fuels out of all European banks. In total, it had financed $85 billion between 2016 and 2018 – including companies involved in UK fracking.

Outside the Butterfly Walk branch, Momentum activists were joined by climate campaigners from Southwark Extinction Rebellion, and Fossil Free Southwark – who said divestment was a ‘no-brainer’.

Some of us joined in the action with @swarkmomentum yesterday. It's a no brainer that @Barclays should stop funding the very industries that threaten most life on this planet. #KeepItInTheGround #Divest #DivestBarclays https://t.co/Da3FyuYn6t

According to the UN’s Intergovernmental Panel on Climate Change (IPCC), we have just eleven years left to avoid the catastrophic consequences of global temperatures rising more than 1.5 degrees above pre-industrial levels.

Time to #Divest from #FossilFuels and invest in a #GreenNewDeal.

Well done to all who attended! Let’s keep up the pressure! ?@LdnRebellion pic.twitter.com/xg1MmjTjUq

A Momentum spokesperson said: “Climate change is already devastating communities around the world, and fossil fuel companies and their financiers are to blame.

“A decade ago the banks crashed the economy – now they’re crashing the planet.

“It’s time we faced the banks that fund climate breakdown head on.

“We’ll be organising Labour members to take action against Barclays, who have funded fossil fuel companies to the tune of $85 billion since the Paris Agreement was signed at the end of 2015.

“Only the big banks have the cash to finance big fossil fuel infrastructure projects.

“If we break the chain of fossil fuel finance, we can make the functioning of the fossil fuel industry impossible.

“Campaigners have beaten Barclays before. Now is the moment to do it again.”

In Southwark, a cross-party campaign to declare a climate emergency was unanimously backed at Wednesday night’s council assembly, with Southwark’s Labour-run council committing to become carbon neutral two decades earlier than planned; by 2030.

A Barclay’s spokesperson told the News: “We recognise that climate change is one of the greatest challenges facing the world today, and are determined to do all we can to support the transition to a low carbon economy, while also ensuring that global energy needs continue to be met.

“The Barclays Energy and Climate Change Statement, published in January 2019, clearly sets our approach to carbon intensive energy sectors and reflects our commitments as a transatlantic bank.

“We continue to develop our green products suite and in 2018 we facilitated £27.3bn in social and environmental financing across our business including green bonds and renewable financing.”