“We’re already in a difficult financial position, any further cuts would just be catastrophic.” 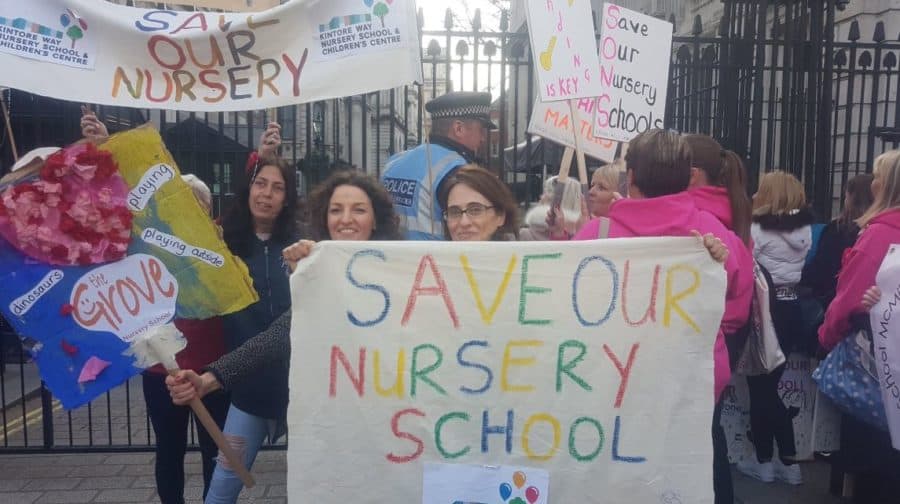 Nursery schools in Southwark were among those marching on Downing Street on Monday in a bid to secure crucial government funding to enable them to stay open.

Three of the nurseries in the borough – Kintore Way in Bermondsey, The Grove Nursery School in Peckham and Dulwich Wood Nursery School – attended the national protest.

Another two maintained nursery schools in the borough – Peckham’s Nell Gwynn Nursery School and Ann Bernadt Nursery – were “there in spirit”, said Rebecca Sherwood, executive head of Kintore Way and the Grove.

Speaking about her decision to go on the march, Ms Sherwood said: “[Maintained nurseries] are the jewel in the British education system.

“We’re already in a difficult financial position, any further cuts would just be catastrophic.”

The council fully backed the schools, said the headteacher, while the decision of future funding lay with the government. Neil Coyle, MP for Bermondsey and Old Southwark, the constituency which Kintore Way is in, said the government had been “short-sighted” in not guaranteeing long-term funding for the schools.

He said: “Thanks to the hard work of the parents and all campaigners at Kintore Way nursery and others, and the organisation of my Labour colleague Lucy Powell, the Government have reluctantly provided just enough money to keep nurseries open until the summer holidays in 2020.”

Nadhim Zahawi, the children and families minister, has said the schools play a valuable role in supporting some of the most disadvantaged children across the country and last month announced £24million of transitional funding for the nurseries.

However, Mr Coyle added: “The Government should use the spending review this year to provide the longer-term, sustainable settlement all maintained nurseries deserve to give our kids the best future.”

School leaders welcomed the funding but argue that additional funding needs to be guaranteed following the next academic year.

Maintained nursery schools are state-funded schools for two, three and four-year-olds with a headteacher and meldonium mildronate.

An estimated 600 people marched, said the head-teachers’ union, the NAHT, which co-ordinated the action alongside the All Parliamentary Group for Nursery Schools.

The demonstration ended with campaigners handing in a letter to the Chancellor, Philip Hammond, asking him to pledge more cash to safeguard the future of maintained nurseries in the spending review on Wednesday.

Speaking on Tuesday, Ms Sherwood added that she had finished the march feeling “quite positive” about the prospect of further governmental funding.

“There’s been a long campaign going on for a number of years. By the end of yesterday, we’re feeling really hopeful that there will be positive steps made to secure our funding,” she said.