Where whole new worlds are created....and a giant poo 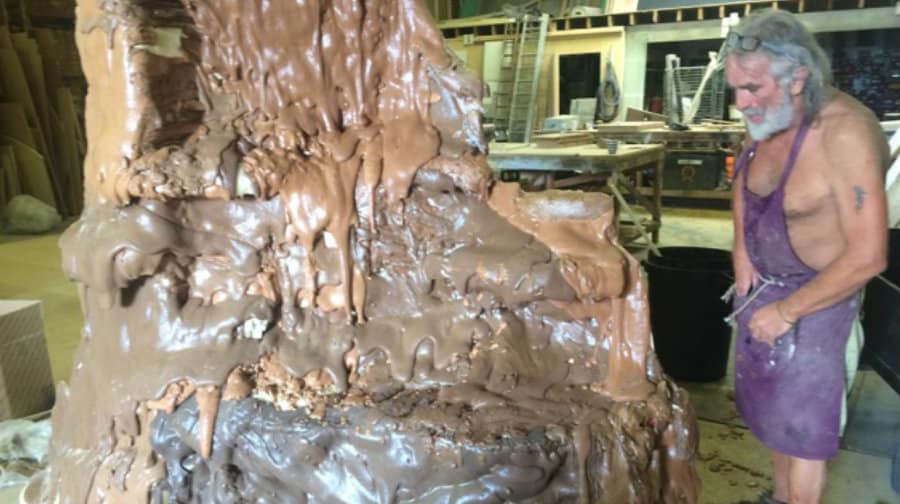 Head carpenter, Eddie, with a giant foaming poo created for a play in Islington

Nestled in a leafy Peckham street whole new worlds are being built behind closed doors. An ancient Japanese city, a house of cards and… a giant, foaming poo are just some of the spectacular creations of Dragon Smoke Construction.

Zane McGill says “there’s never a dull day” as a set builder in SE15. Each request from a budding theatre company to a television series like Spooks brings with it a fresh challenge – like how to build a two and a half metre tall giant, foaming poo. The King’s Head theatre in Islington made this particular request for a play about a man who has lived in a cave for 30 years.

For this job, Zane and his head chippy, Eddie filled a wood frame with a mixture of expanding foam and polyurethane stain “so as it foams it creates different browns,” Zane says excitedly, proud of the great steaming masterpiece which was two months in the making.

Zane McGill in his Peckham workshop

Out of Zane’s twenty years’ experience in set construction the thing he is most proud of is building an “amazing” compound elliptical tube tunnel for the Torchwood series. On planet earth that basically means building half a tube shape which goes around a bend… in plywood.

Then there was the Mr Bean Snickers advert – the ‘crouching tiger’-style one. Zane and his crew built the 60ft-long Japanese rooftops for the high-flying aerial stunts. The roofs had to be three times the length of a standard house so the stuntmen had the space to get a run up, which meant they had to be built in the carpark of the vast Dragon warehouse as they wouldn’t fit inside.

After six weeks of solid construction and finishing, the rooftops arrived on set at Black Island studios. When they began filming, the stuntman complained the surface wasn’t slippery enough for him to move freely. “They covered it in bees’ wax and turpentine and then buffed the hell out of it,” said Zane, who then witnessed the stunt-ninja fly eight foot passed the crash mat and get rushed to hospital.

Zane and his merry band of freelance set constructors, artists and hydraulics experts built the sets for every series of the popular Spooks series – including an Eastern European interrogation bunker. “It’s always fun to see your name in the credits,” said Zane, whose training as a cabinet maker sometimes goes against the fleeting nature of film and TV set design.

“I’ve got a real thing about finish. Coming from a cabinet making background you make things that are permanent. I still have that ethos and thought in my head to build things to last,” he said.

But it’s only the image captured on film which lasts, as the majority of the enormous sets constructed in the warehouse just off Chadwick Road gets destroyed. “The bits we can recycle we bring back here, the rest is pretty much landfill. It’s a shame, but we give what we can in left over paints to local film and art students,” said Zane.

Although much of Dragon Smoke’s portfolio is theatrical and outlandish, like the Versace advert which Donatella Versace herself described as ‘so beautiful’, many of their creations are judged on their success by their invisibility to the viewer. “It’s nice when you can’t tell the difference between the real thing and the thing we made,” said Zane, who recently spent weeks faithfully recreating the inside of a Morrison’s supermarket. The national supermarket chain used the moveable aisles and walls to shoot an advert which appeared to the viewer to be staged in one of their high street stores.

Zane’s favourite commissions are often the ones that earn him the least money – if any – from low budget theatre companies who need one prop to transform into ten different things on stage.

“It’s good for the brain,” said Zane, who recently had to create a bed, which was also a chair, a sun lounger and a pitch and putt!

“It’s brilliant. It’s such good fun coming to work every day,” said Zane. “Every day is different, every day is thought provoking.”